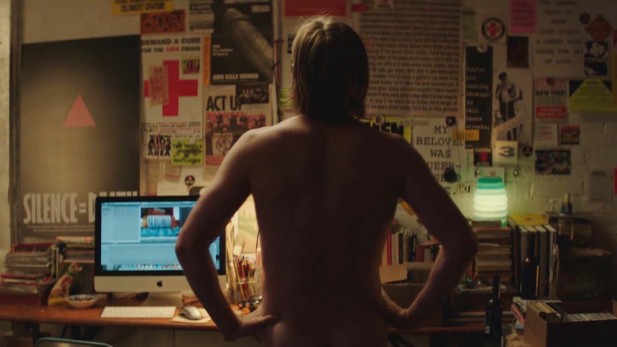 Centred around painter turned video filmmaker Sam Cooper (Cumming), has recently made a film about his dying friend, an important campaigner in the 80s and 90s. At the age of 55, Cooper’s apparent midlife crisis leads him to embark on an affair with the much younger Braeden (Booth), who is living with a boyfriend who is HIV positive. After a night of passionate sex, Braeden is very surprised to find 500$ in his trainers: he was in it for the fun, whilst the older man, rather cynically, saw it as a transaction. Cooper the hearts of the audience, when he criticises a couple of recently married friends, for their “white middle-class values, being traitors to the gay men who died in the last century” – this is particularly offensive, since one of them is black – and Sam is the stereotypical white, wealthy middle-class artist. Meanwhile, Cooper continues to pay Braeden for his sexual favours – a moot point with his live-in boyfriend –  he meets up with his ex-college teacher Julian (Quinton), who is trying hard to age gracefully. The only voice of reason in this mayhem of contradictory emotions comes from Maggie (Chadbury) a black mother.

AFTER LOUIE doesn’t quite hang together despite some insightful moments. Visually weak and weighed down with verbose dialogue, it comes across more like a work in progress than the finished article. AS