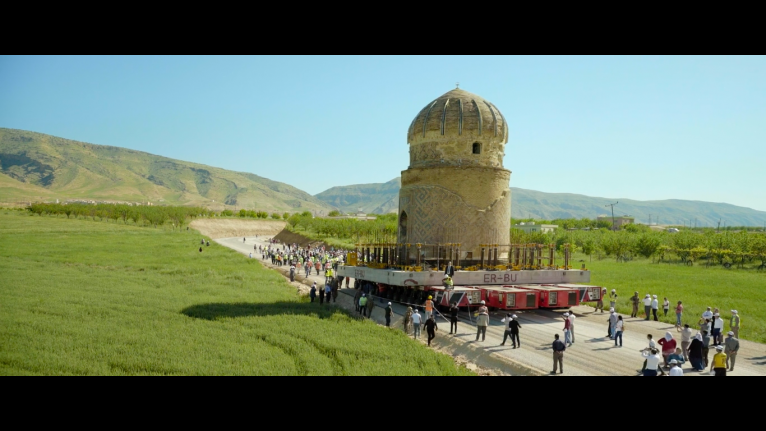 Time is up for the past in Hasankeyf. This ancient town in southeastern Turkey, declared a conservation area in 1981, is now at risk of being flooded due to the completion of the controversial Ilisu Dam.

Many have known exile, but to lose an entire homeland forever without trace is an unimaginable tragedy. But that is what will happen to the 20,000 or so inhabitants who will be displaced forever, torn from their roots by the project. In her debut feature, Rûken Tekes uses a lightness of touch to raise the profile of this eco-tragedy, distilling the unique mysterious essence of this ancient city doomed to disappear forever.

With over 12,000 years of rich history behind its location in the valley of the Tigris River, in the Kurdish part of Turkey, Hasankeyf will soon sink beneath an artificial lake, in order to allow for the construction of the hydroelectric dam. Tekes doesn’t try to explain the details of this annihilation but instead creates a space in which the spirit of the place can express itself in its final months. A space that transcends time and reveals the natural cycles of creation, and destruction that lie at the heart of the film.

History transcends mere words and explanations. So her portrait is a dialogue-free sensory one told through a series of exquisite widescreen tableaux vivants accompanied by an ambient , Tekes reflects on the meaning of a past so primordial and unimaginable to our modern eyes we can only watch with awe and wonder as the images unfold the ambient sound of birds and nature enhancing an experience that feels otherworldly yet very much connected to this unique place. This is a remote corner of the earth where centuries of inbreeding has taken its toll on those who have struggled to survive. A death mute woman expresses her tangible disdain for the project in the only way she is able, her lack of words enhancing the emotional pain expressed in her whole body. Another mute man attempts with sign language to convey his feelings about the movement of strategic monuments to another location so that the future can take over. Some resort to playing folkloric music, or even performing ritualistic dances.  Others just sit silently in bars, their facial expressions signalling deep sadness and disappointment for their forthcoming loss. Rather than listing the treasures that will soon be lost, the film transmit a palpable sense of doom as the heavy machinery arrives in silence in preparation for the translocation. But soon whirring engines signal the start of construction. Aether is a delicately drawn, awe-inspiring love letter to loss. MT