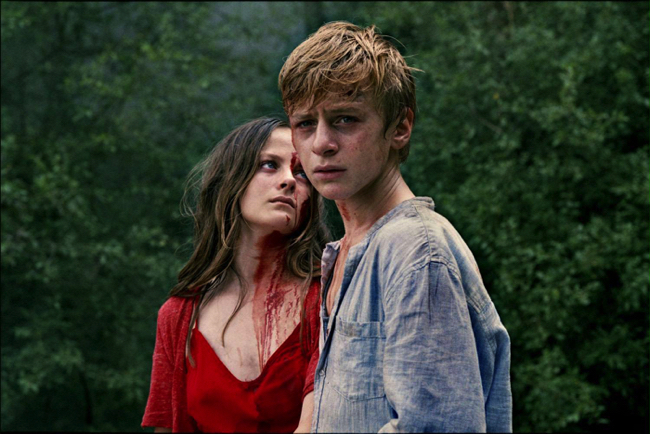 Begian auteur Fabrice du Welz delivers a painterly if predictable paean to first love in his latest psychological thriller that thrilled audiences at Locarno’s 72nd lakeside festival, and is now on Bfiplayer.

Adoration completes his Ardennes trio that started with The Ordeal and followed on with Alleluia. Once again the director uses a ‘folie à deux’ as the premise for a filmic fantasy that rapidly departs from reality. Based on a delusional notion of love, this warped obsession takes over the life of an innocent pubescent boy living with his therapist mother in a remote residential psychiatric hospital. Played by French actor Thomas Gioria (the award-winning star of Xavier Legrand’s Custody (2017), who at still only 14 is proving to be somewhat of a prodigy), Paul is a gentle but rather suggestible boy who relies on the local wildlife for company until he sets eyes on a pre-teen patient in the shape of Fantine Harduin’s delicately-featured but damaged Gloria.

Swept up by her feisty vulnerability, Paul is entranced and determined to get to know her. And despite warnings from the medical staff at his mother’s workplace, he sees Gloria’s desperate bid to escape from the confines of the institution as an exciting game. Once on the run with his new mate, he becomes intoxicated by her manipulative personality and feral beauty, and is determined to serve her needs and wishes even when Gloria leads him into increasingly perilous territory, both emotionally and physically.

Filming in intimate close-up, Manuel Dacosse draws us into this dizzying, dreamlike midsummer fantasy set in the bucolic backdrop of the Ardennes countryside. Our senses are aroused by sounds of bees and the heady scent of lime trees as Paul is bewitched by Gloria’s disingenuous charm and ruthlessness. Confused by his adolescent feelings, he is more than eager to follow these misguided instincts. Meanwhile, we desperately know that this amour fou will damage him forever when it all ends in tears, as it surely will.

Adoration is a fantasy. And a fantasy that slowly morphs into a convincing nightmare skimming over its many plot-holes, as the pair continue their journey into darkness, helped by a series of concerned and well-meaning adults, the authorities seemingly evading them at every turn. In her delusional madness, Gloria sees everybody as a threat, even when they offer food and shelter: the kindly widow played poignantly by Benoit Poelvoorde, and the loved-up couple on a boat (Peter Van den Begin, Charlotte Vandermeersch) whose sexual chemistry helps to ignite Paul’s burgeoning feelings of pubescent lust. And although Paul is able to appreciate their kindness, he is blinded by the power of his overwhelming feelings for Gloria who merely uses him to serve her needs –  and it’s an remarkable performance from Harduin who manages to conjure up facial expressions of pure evil for one so young. Gioria’s Paul is a fresh canvas, a pure vessel that holds only kindness and goodwill as it hurtles towards a wild, uncertain fate. MT