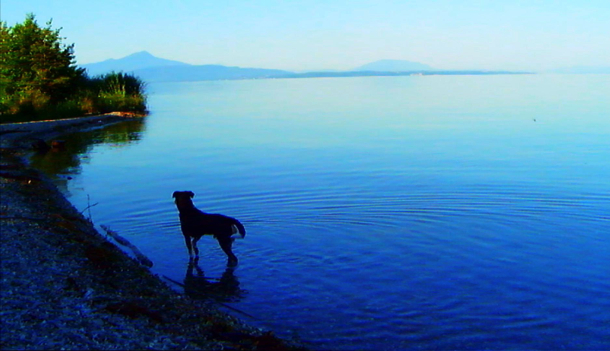 The old provocateur is back: JLG is 83, but still out to re-invent cinema as we know it. This time, his main challenge is to subvert 3D into his universe of chaos, quotes and role-plays. And a dog, no less than the master’s very own Roxy Mieville, is the co-star. Before we get too carried away by the master’s latest innovations, let us not forget that some of the great ‘revolutionary’ ideas came about by chance: his famous editing style, which made his debut Breathless so wonderfully new and vibrant, was the result of his producer wanting the original two hour version cut. JLG, instead of taking whole scenes out, as it was the norm in those days, simply cut his scenes, leaving a more open ending to many of them. And how much did we admire actors reading ‘political’ news from the newspapers of the day – like in Bande à Part. Only to be told by DOP Raoul Coutard, that JLG did not have enough script material to shoot the daily quota asked for by the producer – and simply improvised by said readings. Just to remind us all that what we might admire today as just another sign of greatness, may well have had a much more down to earth origin.

Having said his ADIEU TO LANGUAGE is full of verve, and not so overloaded with quotes and allusions as Film Socialism; it is in a way a return to the “old’ Godard of the 60s. To start with, a couple (and a dog) are the centrepiece, we even get a sort of a narrative: they are discussing, fighting, mostly naked and trying their best to look like the couple in Une Femme Mariée, not only because she is married and he is single, but even their playfulness camouflages deep unrest. Their dog Roxy steals the show often, and Godard, not overly fond of humans, pays the mutt the compliment “the dog is the only creature, who loves others more than himself”.

We get the usual quotes, Aragon, Faulkner and Sartre among them, and see old movie clips (Peck and Gardner in Kilemandjaro and Miriam Hopkins in Jekyll & Hyde); JLG’s own costume drama – Mary Shelly is writing “Frankenstein” at Lake Geneva and lots of music by Schoenberg. There are witty (but ultimately empty) remarks like “Solzenitsyn did not need Google’ or “Those lacking imagination take refuge in reality”. And when we deconstruct the title, we end up with “Ah God” and “Oh Language” – very clever indeed!

But he main assault is saved for the visuals. Apart from the usual multiple video formats, colour saturated HD and grainy video shots; JLG ‘invents’ his own 3D version, where we get different images for each eye, the third dimension making the 2D version look like old fashioned theatre backdrops, the superimpositions such creating another dimension. These images of the background create another film all together, Godard showing the chaos we live out in our visual double world, where the pictures, words and feelings don’t go together any more. The many fragmentations of modern life have rarely been shown so impressively on image, sound and context level.

GOODBYE TO LANGUAGE proves that JLG still wants to do things his own way – he’d rather show a dog’s view of the world: barking mad he might be, but there is nobody else left who dares. AS