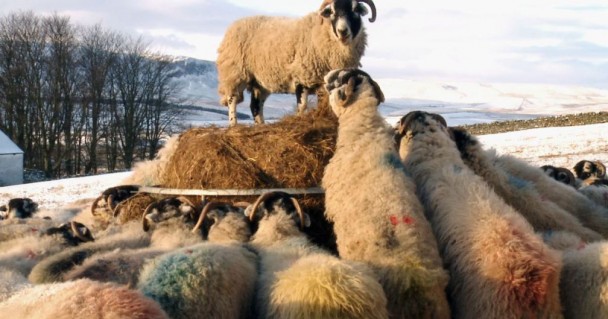 With the Hutchinson Family

It takes a French woman to capture the quintessential Englishness of country life in a Pennines farming community. And she does so with a feeling for the ‘terroir’ that could certainly make sheep-rearing catch on, especially if you’re not afraid of hard work and yearn for a simple family life in the big outdoors, caring for animals and relish locally grown produce. Tennant farming couple Tom and Kay have found their idyll in the glorious open spaces of the Cumbria and Yorkshire, where they lease a farm, in true English feudal style, from Lord Barnard.

Documentarian Magali Pettier grew up on a farm in Brittany and is now based in the North East England, where she has made ADDICTED TO SHEEP, her debut feature. Collaborating with the Hutchinson family and their three young children, she chronicles both the pleasures and the pitfalls of rearing special breed sheep.

Although Pettier injects charm and gentle humour into her story, this is no cuddly picture of furry lambs but a visceral and at times harrowing look at our atavistic relationship with animals that is deeply rooted in the English rural tradition: you may need a dictionary to understand the arcane language of sheep farming. Pettier’s framing and creative camerawork adds visual poetry to this down to earth portrait of the harsh and gruelling realities of living on a farm. Tom and Kay face the same struggles as any couple: paying the bills, raising their kids and planning for retirement while running a precarious ‘cottage’ industry with the aim of making an annual profit out of their livestock, whose ‘sole aim is to die’. But their existence has its compensations: a ready supply of nutritious food, fresh air and the joys of nature in comfortable farm amidst some really magnificent countryside.

Capturing the daily grind from snowy winter scenes through to late summer on the farm, Pettier cuts between shots of Tom Hutchinson pulling a bloodied and stillborn lamb from its mother to idyllic panoramas of wildflower meadows, where his tiny daughter paints the landscape and dreams of becoming an artist. In a school full of local kiddies, the talk is focused on the future where all the children want to work in the farming industry when they grow up.

Pettier does not attempt to be philosophical – this arthouse gem connects in a simple yet effective way to the global narrative of survival for small communities all over the World, showcased in similar British documentaries Village at the End of the World (2012) and The Moo Man (2012). ADDICTED TO SHEEP raises the crucial and timeless issue of the food we eat being connected with farmers who really care about their livestock and produce rather than large corporations who rob them of their profit margins and ultimately threaten our health, wellbeing and the future of British farming. MT