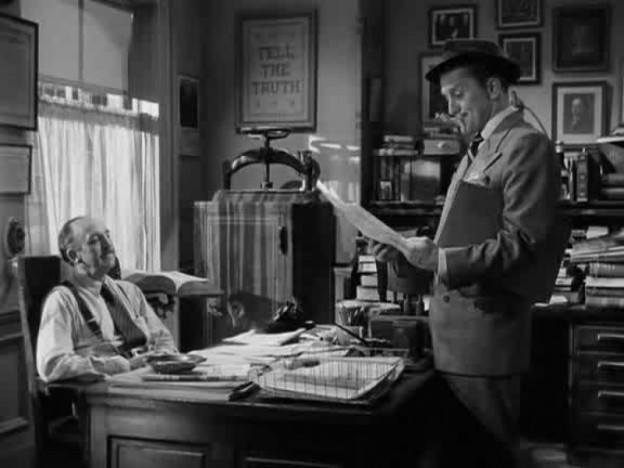 Billy Wilder’s Ace in the Hole is one of his greatest achievements but also his biggest commercial failure. In Cameron Crowe’s book “Conversations with Wilder,” Wilder states that his films probably contain more irony than cynicism, and then he makes an exception, “Maybe Ace in the Hole. That was the one. It was the way I thought the picture should go.”

Unfortunately public and critics didn’t go along with such a corrosive depiction of media manipulation and its shoving of the public’s face in the dirt. The film was released in 1951. The Korean War was at its peak and many Americans found it disturbingly anti-American, and a few thought it Communist inspired. Paramount’s change of title to The Big Carnival didn’t help its box office performance.

Ace in the Hole tells the story of Chuck Tatum (Kirk Douglas, at his very best) trying to make his way back up the career ladder as a newspaper reporter. Stuck on an insignificant provincial paper, he yearns for excitement. This comes in the form of Leo Minosa (Richard Benedict) who gets trapped in a cave looking for Indian artefacts. Tatum sets up a rescue effort in order to prolong the story for maximum exposure. He ruthlessly employs the victim’s wife Lorraine (Jan Sterling), the Sheriff Kretzer (Ray Teal) and engineer Sam Smollet (Frank Jaquet) to this end. The public flock to witness what becomes an entertainment with a country fair and instant ballad making. Tatum contacts an editor in New York to get the biggest scoop possible. But his vitriolic and scheming plans come horribly undone.

For Ace in the Hole the writing trio of Wilder, Walter Newman and Lesser Samuels provided a scorching script. I could easily spend the rest of this review giving you examples of its acrid and cynical tone. But that would spoil your full enjoyment of the film. A script this good and sharp functions as cinematically as the most dynamic film editing; sweeping you along with a precision that exposes all the characters strengths and weaknesses (mostly weaknesses!).

Billy Wilder has his detractors who claim his words are often made subordinate to his images. Not so. They enhance. And Wilder was never a showy director. Yet when he wants an image to have maximum impact, he delivers. No more so than in the powerful final shots of Chuck Tatum. Yet like the dialogue treats, I wont divulge such a satisfying comeuppance.

Suffice to say if you admire Von Stroheim’s Greed, Scorsese’s King of Comedy
and Nathanial West’s novella The Day of the Locust, then Ace in the Hole joins that
select company as a bitter destruction job on The American Dream. Frighteningly acute in its take-down of the media, public collusion, personal ambition and greed, it is one of the great films of the fifties. Substitute Ace in the Hole’s radio cars and candy floss for an international TV crew; hand out smart phones with cameras, Twitter and facebook and the show still goes on. Alan Price