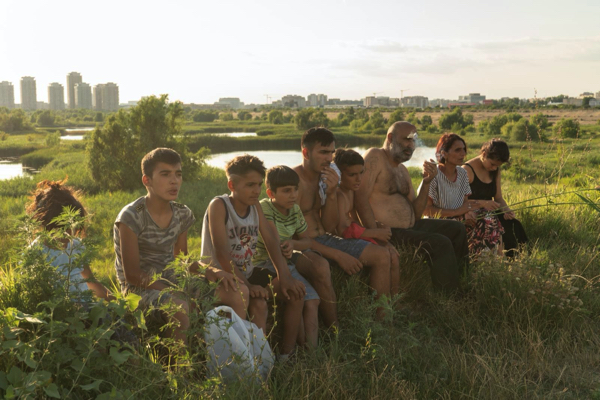 The Enache Roma clan are the subject of this powerful ethnographical portrait from Romanian first time filmmaker Radu Ciorniciuc.

The wilderness surrounding Bucharest’s Lake Vacaresti has for the past eighteen years been home to a couple and their  nine children on the banks of a former reservoir dwarfed by tower blocks. Four year’s in the making Cioroniciuc has followed their existence which is so radically unconventional compared to the average Romanian lived through decades of change as Bucharest moves into the 21st century.

We meet parents Gica Enache, a former chemistry lab assistant, who left the ‘wicked’ city with his wife Nicolina Nedelcu 18 years ago. Their nine children frolic around unsupervised, taking advantage of the beautiful countryside, particularly the lake. The family survive despite their financial poverty, putting a meal on the table from the farm stock that shares their dilapidated shack (we see the offscreen slaughter of a pig).

Social services has long tried to get hold of the children, and we witness another unsuccessful attempt by the authorities, when Gica asking the oldest, Vali, to take his younger siblings into a hiding constructed specifically for this purpose. Meanwhile Gica prefers to lounge around smoking rather than being involved in family matters, which are left to emaciated Nicolina, who is totally overwhelmed by the lack of amenities. Her husband is the model of an authoritarian patriarch playing the role of a free-wheeling hippy. But their days in anarchic freedom are limited: The Romanian government declares the Bucharest Delta a Nature Reserve, the Prime Minister and Prince Charles (!) appear on the scene to celebrate the occasion – followed by the bulldozers.

The clan has no alternative but to agree to a move to the nearby capital, where they are housed and the children integrated into the school system – a traumatic event for most of them, because their contemporaries are far more sophisticated. Only Vali, soon to be eighteen, has a go at fitting in and this brings him into conflict with his father who burns the books the younger children have been given. Vali moves out to live with his girl friend, who is soon pregnant. With great insight he tells her they should not have a child “because then we would be three children”. On a visit home, Vali listens to his father who, in his usual long-winded speeches, blames everybody else for the family’s plight. He excludes his wife: “Only Nicolina has given me any hope” which Vali counters with “and what have you given her?”. The ending is melancholic: the family, who has not looked after the flat, is put into inferior accommodations’, whilst Vali works in the new Nature Reserve, which was once had been his play ground.

Lyrical and poetic despite the challenging topic, Acasa is a powerful and passionate long term study about was freedom really means. Their upbringing in mother nature certainly appealed to the young kids, but poverty and isolation had a greater impact on their upbringing. As Vali shows, there is an alternative to strict ideological-based country living. As for his younger siblings, integration meant discovering a whole new world. Ciorniciuc maintains a detached approach never letting the growing familiarity with the clan cloud his judgement. A labour of love and a memorable one. AS