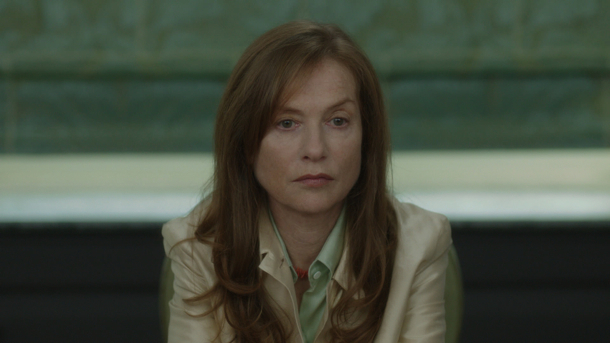 After two rather disappointing films The Sleeping Beauty and Bluebeard, Catherine Breillat has returned with ABUSE OF WEAKNESS to her usual confrontational style – chronicling the gender war in films which show that women are not always the victims as commonly assumed. Sale comme un Ange (1991), in which the heroine Barbara, married to a young policeman, falls for his superior and gently coaxes him into killing her husband in an arrest gone wrong, so that she can marry him, is a good example.  ABUSE OF WEAKNESS is an autobiographical film too.  The  protagonist, Maud (Isabelle Huppert),  is a middle-aged film director, suffering from a recent stroke, which has left her impaired. 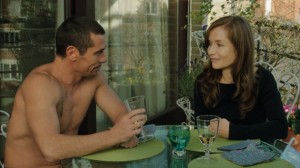 While recovering in bed, Huppert (in her usual ‘couldn’t-care-less mode’) sees gangster Vilko (Jool Shen) being interviewed on TV and decides to cast him in her next film. Vilko is a wild boy and Maud’s family and friends are very protective of her. They seem justified in their suspicions: Maud is lending Vilko more and more money – seemingly to keep him keep on board for the film project. Vilko’s introduces Maud to his young wife and baby and from then on the power structure changes. Whilst the sums of money Maud is giving him get bigger and bigger, so grows Vilko’s dependence on Maud  and a worrying dependency between the pair gradually gets stronger.

Breillat’s character of the hemiplegic Maud is a challenging role for Huppert and she rises to the occasion giving a magnificent performance: suffering physically, only to get stronger mentally. Vilko starts with the upper hand but he turns out to be a real pushover, unable to see the trap Maud is setting for him: luring him into her lair like a crafty cat playing with a mouse. Vilko’s only interest in life is money and he can’t work out how Maud has managed  to capture his soul. She might not be able to compete sexually with his attractive wife, put she can push the right buttons to make Vilko into her own creature, even joking “that she is doing his wife a favour”. 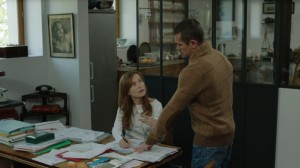 Breillat’s cat and mouse game develops slowly, set in the wide open seascapes of the Belgian Riviera and Brussels. The longer the films goes on, the muter the lighting becomes;  the living quarter shrink and in the end Maud and Vilko are living in a quasi building-site more or less in one room. It is a perfect symbol of their relationship: the handicapped Maud imprisons Vilko in this small room, as he slowly relinquishes his masculinity. The power of money is for once defeated by a cruel but effective woman. Her weapon is not her beauty, but her sheer strength of an analytical strategy and willpower. For  Isabelle Huppert lovers, it’s a film to be relished.

SCREENING AT THE BFI LONDON FILM FESTIVAL ON 14, 15 OCTOBER AT OWE2 AND 17 OCTOBER AT CINE LUMIERE