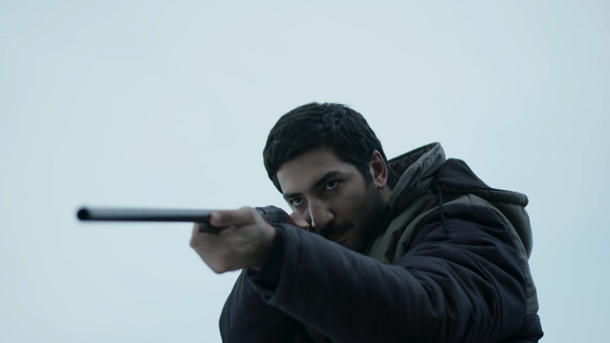 Mehmet Ozgur played the central role in writer|director Emin Alper’s stunning debut Beyond the Hill. Here he is again as the eldest brother in a family struggling to survive political violence in a dystopian Istanbul. Menacing by the same brooding tone of his first feature, FRENZY (Abluka) is a study in paranoia that transport the threat experienced in the mountains of Beyond the Hill‘s Karaman, to an urban setting in the capital.  Here the authorities here are losing control, and to achieve a semblance of order, Kadir and his brother Ahmet (Berkey Ates) are working to establish a reasonable living environment by clearing away undesirable elements: stray dogs are mercilessly shot and rubbish is collected and disposed of on a daily basis. But despite these methods of civil control, disorder rears its ugly head.

As in all Turkish films, the family is crucial to the storyline: and the family is usually divisive in some way. Here, the violent city environment – nightly bomb blasts from ‘terrorism’ and an aggressive police presence, are having a de-stabilising effect on Kadir’s relationship with Ahmet. Ahmet’s wife has left with their children. The middle brother Ali has disappeared. Kadir has served time in prison and is now working out his parol in a community-based rubbish clearance project which includes ‘bomb’ disposal. The stray dogs appear as a metaphor for the universal theme immigration. As a clever corollary to this, when Ahmet discovers an injured dog in his street, he takes him in but treats him badly.

Ahmet is clearly at odds with Kadir and resents his constant visits which turn into menacing intrusions with Kadir practically banging down the door and ringing his ‘phone incessantly. Ahmet retreats into himself as an act of defiance and fear. The two are clearly not communicating: another modern predicament that is skillfully woven in the storyline. Kadir’s boss (Mufit Mayacan)  starts to question his overly diligent report-writing (Mufit Kayacan). The projection here is evident. But in the absence of any real threats or tangible facts in this febrile and suspicious environment, one starts to tire of the enigmatic thriller and its suberb but deafening electronic score (Cevdet Erek also scored SIVAS). That said, this is a well-crafted affair set both on the widescreen and in intimate domestic scenes that successful evokes how daily paranoia can seep into the fabric of our everyday lives threaten our ability to communicate successfully and healthily. Alper has built a menacing thriller that conveys this paranoia with dramatic affect. While it has it downsides, he is a director worth following. MT