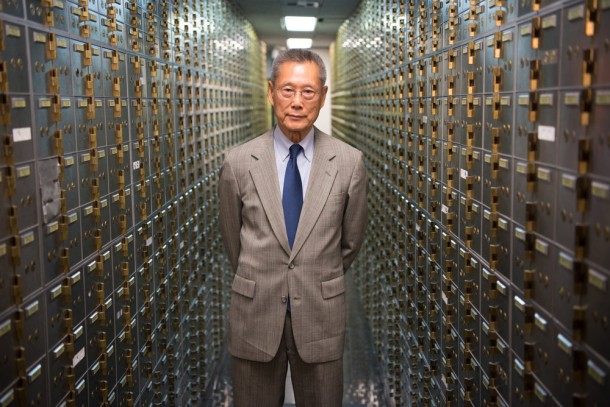 Steve James’ documentary portrait from the mortgage fraud episode of 2009 is both moving and informative. It follows a Chinese family, who run a community bank, Abacus Federal Savings Bank in Manhattan, and whose life is turned upside down after an over-eager District Attorney accuses the founder and his daughters of mortgage fraud.

Thomas Sung was born in Shanghai in 1935 and emigrated to the USA, where he became a lawyer. He had four daughters with his wife Hwei Lin, three are lawyers like their father, another is a doctor. In December 2012, New York District attorney Cyrus Vance swooped on Abacus, accusing them of mortgage fraud on a grand scale. Considering the Abacus Bank was number 2651 in volume in the USA, this is rather surprising, even more so, when you consider that Abacus’ default rate on its mortgages was 0.3%. This was just four years after the banking crisis in the USA had caused losses of around 22$ trillion, after bad mortgages to the tune of five trillion$ had (nearly) caused the collapse of the whole banking system, had the government not bailed out the leading banks.

Until today, Abacus Federal Savings Bank is the only US banking institution to be charged for fraud in connection with Fannie Mae and the associated crisis. Sung had founded Abacus in 1984 as a community bank for the Chinese minority and Vance’s only ‘trump’ was his star witness of the prosecution, Abacus employee Ken Lu, who had been found out by Sung and his daughters of defrauding the company and had been sacked, before Vance had Sung and fifteen employers of the bank handcuffed, and let to the police vehicles in the glare of the TV camera lights. This was a breach of law in itself, since five of the handcuffed had already been released on bail. So began a five-year long ordeal for the Sung family, who were joined in their legal fight by Chanterelle Sung, who had worked before for the DA’s office in New York. The trial began in February 2015 and ended in June. Interviews with some jury members are particularly interesting, since the jury was split at the beginning of the fortnight long deliberations.

James shows the family not only during their discussions involved in their legal defence, but also follows the clan through the Chinese community; taking in some mouth-watering restaurant visits. Thomas Sung, whose favourite film is It’s a Wonderful Life, identifies very much with the James Stewart character. Even after the ordeal, he still believes in the American dream, of which the film is, in equal parts, a verification and repudiation. AS

NOW OUT ON RELEASE