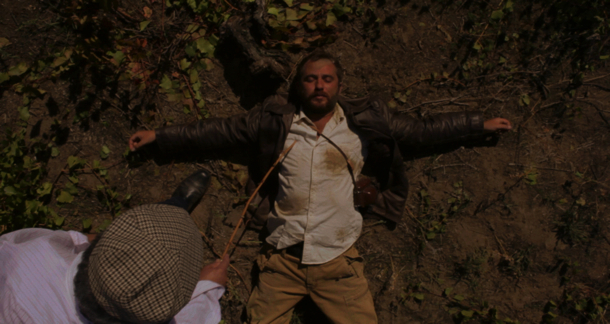 Jonathan Cenzual Burley’s debut Soul of the Flies, was a wonderful story about a meeting between two long-lost Spanish brothers, featuring elements of magic realism. In his latest drama The Year and the Vineyard, he’s tried very hard to follow in the footsteps of Michael Radford’s Il Postino, a gentle bitter-sweet comedy about Pablo Neruda’s life emigration to Italy. Somehow Burley fails, because his premise never rings true – three men and a ladder into the sky is simply too far-fetched. Other parts are truly funny, particularly the slightly gay priest trying to find Andrea’s wings, whilst reading aloud from a book to discover their location. Calabrese tries very hard to be convincing, he doesn’t lack charm, but the script leave him little chance.

The film is set in 1937. After leaving his village in Sicily (and his fiancé Isabella), Andrea Pesce (Calabrese), joins the Garibaldi Brigades on the side of the Republicans in the Spanish Civil War. On the way to the battle of Guadalajara, he suddenly finds himself in a vineyard in the province of Salamanca – the year being 2012. The vineyard owner is much more concerned by the destroyed vine, but the priest (Saez) hopes that the man who “fell from the sky” is an angel, or at least a saint. The village teacher (Garcia) has a more rational approach, but can’t help Andrea neither, since the latter finds a photo of Isabella in a book, showing her being active in the battle of Guadalajara in 1937. Finally the three men threw stones into the air, near the spot where Andrea landed – and finally find a hole in the sky. Via a ladder, Andrea climbs up, to find Isabella…

Cenzual Burley is very successful in the scenes helping the teacher to declare his love for Maria, proving that all the story strands outside the implausible main plot are rather well done. What sinks the film is its flimsy link to the Spanish Civil War, which always seems an abstract concept.

In lively and convincing performances, the trio tries their best to make up for the holes in the narrative. Camera work is conventional, too often producing idyllic post card images without creating any specific atmosphere. But the main drawback is Cenzual Burleys’ script, which mixes high-minded philosophic concepts with silly, second rate slap-stick comedy, ending up with neither a meaningful message or a truly comic film.  AS