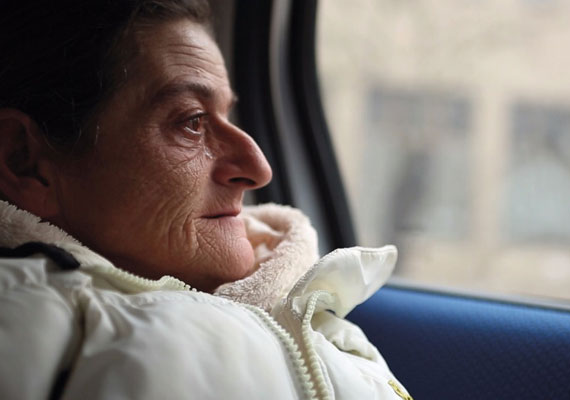 Bernadett Tuza-Ritter (Cinetrain: Russian Winter) has certainly achieved something remarkable: her documentary about a Hungarian woman enslaved by an ordinary family is not only moving, but Tuza-Ritter can claim that her film really changed the life of the central character.

We meet Marish, a dishevelled woman of 53 (who looks thirty years older) being woken up early in the morning so she can feed her employer’s menagerie of animals in a backyard of the family home. And this is Europe. Marish has been held in captivity by her boss Eta for over eleven years. Her youngest daughter Vivi escaped the draconian demands of Eta, and lives nearby in the comparative safety of a state orphanage. Without holidays or any time off, Marish is permanently on call to her boss who lives a life of leisure. Tasked with housekeeping and the care of three unruly children, Garish also has to work a daily shift in the factory, giving her boss the monthly wage of 550 Forint to cover her “lodging and food”. Eta makes money out of Marish whenever there is a chance, and insults her into the bargain.. The filmmaker was forced to pay the mercenary Eta 300 Forint a month to gain access to film film Marish – and only under Eta’s strict auspices: Tuza-Ritter was not allowed to film the regular beatings Marish is subjected to in this miserable household. Tuza-Ritter phones the police, but is told that they are unable to take action. In Hungary domestic abuse can only be prosecuted where the victim is related to the aggressor.

To add insult to injury, Marish gets the blame when Eta’s kids break her favourite wine glasses; even the dog Lola is treated with more respect and care than this dejected female servant. Finally, Tuza-Ritter helps Marish to escape to a safe house in a city 200 km away from her tormentor. Although the filmmaker maintains a detached but decent attitude during their nighttime escape from the eta’s premises, Marish is still convinced that she will be betrayed. But when the woman confesses that her real name is Edith, and that Marish was her slave name, we realise that a psychological barrier has been broken. Soon Edith is re-united with her daughter Vivi, who is expecting a baby.

That slavery is alive and well in the EU came as a shock to the director, and will also horrify the audience. Both the police and the social services seem completely unfazed by this parlous situation. What is missing here is an enquiry as to why Marish became a slave in the first place? Marish doesn’t wear chains, so what exactly quantifies her “being held a slave”?  Clearly from the way she talks and behaves, there are indications that Edith has always suffered from low self-esteem and it soon emerges that she has a history of colluding with powerful figures in her life, allowing them to dominate her. She does not appear to have been locked up or in Eta’s house, or indeed, prevented from escaping, so she has clearly ‘acquiesced’ on some level to her imprisonment and cannot therefore technically be classified as a slave. But without knowing anything about her early childhood or upbringing these are only assumptions. It would appear she is just a victim of circumstance who has allowed another human being to take advantage of her for too long.

Tuza-Ritter’s camera is the witness of Edith’s ordeal, and the intimate images are often frightening: Edith is not even allowed to sleep in her own bedroom, but on a couch in the hallway. She is isolated, with no friends or contacts nearby. She is, literally, kept in the dark. A Woman Captured is a brave document, a unique achievement, because the filmmaker took action, when nobody else cared. But whether it’s a testament to modern slavery is questionable. Tuza-Ritter achieves an intensity akin to a Grimm’s fairy-tale, with Eta as the evil witch. MT