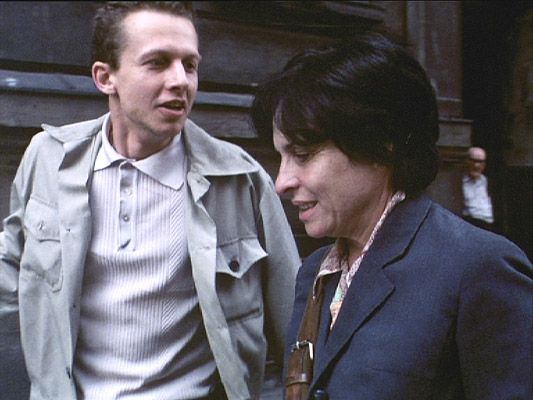 The gruelling life of a single mother is the subject of Agnieszka Holland’s humanist but harrowing slice of ’80s social realism. Irena (Maria Chwalibóg|Mother Joan of the Angels) shares her bed and bathwater with her little son Bob (Pawel Witczak) in a small rented room in Wroclaw. The landlord regularly switches off their electricity supply, babies cry endlessly next door and her job as a postal worker is physically overwhelming. To make matters worse, she is forced to care for and support her sick and mean-fisted aunt who lives nearby. So much for communism.

Intimate in scale but far-reaching in its implications, this heartbreaking domestic drama touchingly depicts the close ties of family and the devoutness of religious feelings in a small community; but above all the hopeless desperation of a woman who has no joy, warmth or affection in a miserable existence where she feels neither respected nor valued. The stress of her meaningless life eventually leads her to the town hall where she makes an emotional appeal for better conditions and housing, but is sent packing by the authorities.

Agnieszka Holland shot this sharply critical feature on a hand-held camera shortly before making Angry Harvest. As a woman she is able to empathise with the female need to express feelings of alienation and loneliness in a world where outside emotional demands submerge her central character’s wellbeing.  Holland ellicits a poignantly discrete performance from Maria Chwalibóg, who shows how the interest and support of a masculine presence allows her eventually to tolerate her situation and care for her dependents. This support comes in the shape of a disabled younger man, Jacek. Although she is not attracted physically to Jacek (an unglamorous but award-winning role played sensitively here by Boguslaw Linda), she befriends him, disarmed by his desperatation to show her love and just to be with her. The two develop a relationship of sorts that leads them to a brief moment of happiness until they realise tragically this is also a point of no return. MT