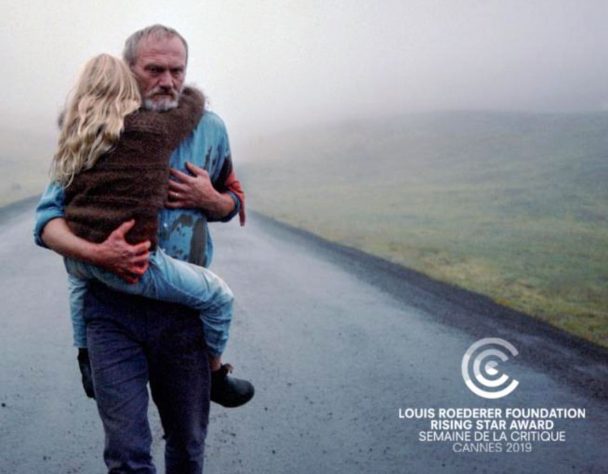 Hlynur Palmason follows his debut feature Winter Brothers with this stark portrait of rugged masculinity in the face of bereavement. Grimly buttoned up against the wild landscapes of his remote Icelandic homeland, Ingimundur (Sigurdsson) resolutely refuses to give in mentally and physically to the grinding grief that engulfs him after the death of his beloved wife.

The seasons pass in a series of long takes picturing the house Ingimundur is rebuilding with support of his young granddaughter Salka (Ida Mekkin Hlynsdottir in her stunning debut). His wife, a local teacher, has lost her life in a car accident and the vehicle swerves over the foggy mountainside road in the opening scene.

Ex-policeman Ingimundur is used to dealing with similar incidents and their effect on broken families but when it involves his own he carries on in disbelief as gradually the enigmatic scenario surrounding her death falls into place; whether a crime has been committed or her whether her death was accidental remains in the air as this dour and gruelling feature plays out. Sigurdsson gives a gritty performance tempered by the tenderness he feels for his granddaughter: it’s almost as if he’s channelling all the love he had for his wife into the little girl, and she soaks it up with wide-eyed innocence and an insight beyond her years.

Palmason suffuses his story with allusions to Icelandic culture and mythology and these are shared through storytelling: the craggy-faced grandfather passing on cherished folklore through bedtime stories complete with all the actions. And meanwhile the house takes shape around them, satisfyingly providing a new beginning with stunning views over the scenic countryside and sea where Ingimundur fishes for wild salmon. He also plays football and this is where he catches sight of a man he doesn’t recognise but who has appeared in a cache of his wife’s photos. Ingimundur shares his fears about a possible affair with one of his drinking pals. And the subject of female infidelity is broached with a shrugging nonchalance on the part of his friend. But Ingimundur’s fears take shape in an irrationally violent chain of events, sparked by jealousy, revenge and desperation in a tense and surprising finale which once again showcases Palmason’s inventive imagination for telling a yarn. MT