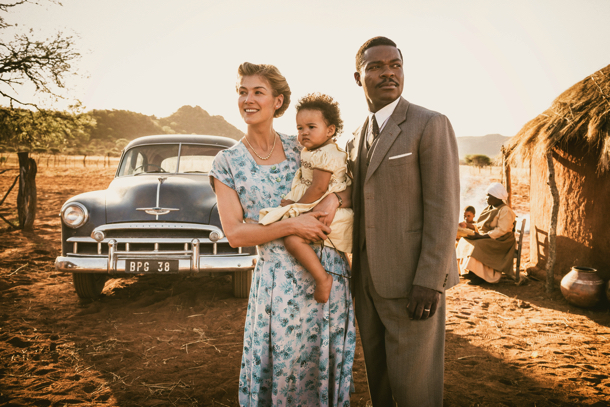 Director Amma Asante’s moving portrait of the love story between English secretary Ruth Williams and Seretse Khama, Prince of Bechuanaland, offers political clichés instead of analysis but stays just the right side of a good melodrama held up by its convincing lead performances. With her scripter Guy Hibbert, Asante dusts down with a certain aplomb this fascinating episode from England’s post war history and Pike and Oyelowo share a natural onscreen chemistry that feels both genuine and appealing.

Clearly, it was love at first sight when Ruth Williams (Rosamund Pike) met Prince Seretse Khama (D. Oyelowo) at a London dance in 1947 organised by the Missionary Society – of which her sister Muriel (Carmichael) was an avid member. Prince Seretse had come here to study Law and one year after their ‘coup de foudre’ the couple married at Kensington Registry Office, since the Bishop of London, William Wand, would only allow a church wedding if the government gave its consent. Needless to say, this did not happen and the couple are treated rather shabbily by the powers that be. And also by their own families: Ruth’s father George disowns her and things don’t get better for the couple in Bechuanaland (Botsawana) – at the time a British Protectorate: Seretse’s uncle Tshekedi (Kunene), who wants his nephew to succeed him as a ruler, but only on condition of Seretse marrying a black woman. The Prince’s sister Naledi (Pheto) offers the couple her reluctant support.

Back in London, Prime Minister Attlee is in league with the South African government, who has just introduced Apartheid. Since South Africa cannot stomach a multi-racial couple governing in a neighbouring country, Attlee agrees that the prince should be exiled from his own country for five years. After Ruth gives birth to their first child, she and her husband put all hope in Winston Churchill, who had promised Khama’s return to his homeland. But once in power, Churchill just expands the exile for the whole lifespan of Khama (“being in opposition is one thing, the reality of governing is another one”}. Meanwhile, in the future state of Botswana, Alistair Canning (a sneering Davenport), and his wife (Jessica Oyelowo), try their best to persuade Ruth to give up her marriage, and Alistair even puts on the garish uniform of a Viceroy, to impress the locals. But with the help of Tony Benn (the grateful couple would name one of their sons after him) and petitions by the population of his native country, Ruth and Seretse are allowed back to Bechuanaland in 1956, after living five years in Croydon. Seretse Khama would later modernise the country as the first President of an independent Botswana.

The scenes in London are realistic but the Bechuanalanders are shown as being rather naive and very romanticised, the newly independent Botswana was, at the time, the third-poorest country in the world, despite fantastic mineral reserves. Pike and David Oyelowo really hold it all together and one can really believe their boundless love, which started with their common passion for Jazz. The political machinations are the weakest part of A UNITED KINGDOM: the characters involved in these scenes are not only shown as manipulative, but also downright unappealing: merely satirical cardboard cuttings. DoP Sam McCurdy succeeds in great panoramic images in Africa, and a foggy, subdued post-war London, still staggering on its knees from the war. Whilst this is certainly a story which needs to be told, Asante and writer Guy Hibbert, often simplify the political aspects, using the protagonists as ‘talking heads’.  When all said and done, A UNITED KINGDOM has great universal appeal as being a real and enduring romance between Ruth Williams and Seretse Khama, lasting until his death in 1980. AS

SCREENING from 25 NOVEMBER AT THE TRICYCLE CINEMA, ODEON, PICTUREHOUSES AND VUE