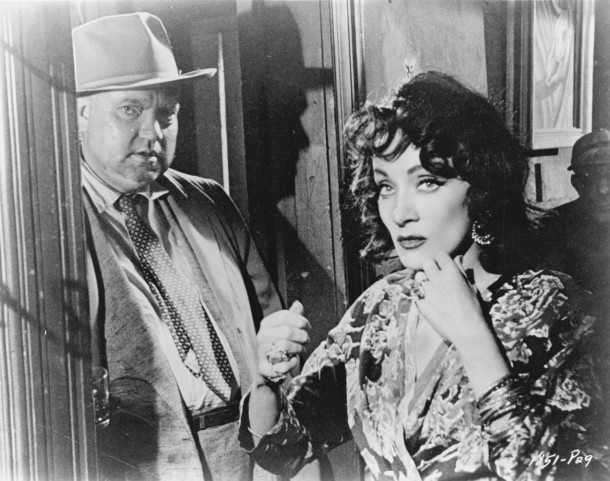 Writer: Orson Welles, from the novel by Whit Masterson

Welles’s Hollywood career was really all about film Noir and although The Stranger did best at the Box Office, A TOUCH OF EVIL, was considered his ultimate cult picture. In a US border town with Mexico, Welles stars as the corrupt and bloated homicide cop Hank Quinlan, who is unable to get over the death of his wife by strangulation. Charlton Heston plays a dignified Mexican narcotics agent who is married to a proud and pouting Janet Leigh, a role that prepared her for Hitchcock’s Psycho . The opening scene is particularly atmospheric as we are thrown into the midst of this sleazy world as it unfolds with a mixed score of eclectic beats, giving a real impression of a night on the town in dregsville during a tracking sequence that rolls on for over 3 minutes, without titles. With Welles at the controls the story is transformed into a dark, perverse and twisted affair, marking him out as one of the most inventive directors of the era. From this unique opening long-take to the  final scene where a superb Marlene Dietrich comments “Hank was a great detective all right – And a lousy cop”  A TOUCH OF EVIL seethes with malevolence. MT.

ON LONG RELEASE AT THE BFI SOUTHBANK IN CELEBRATION OF A THE CENTENARY OF ORSON WELLES.