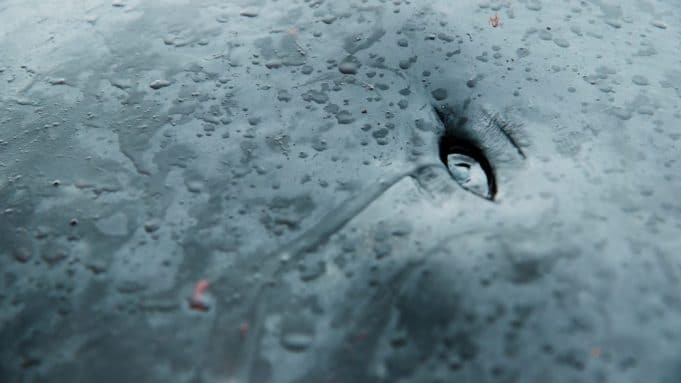 The Faroe Islands archipelago is one of the safest places in the world, but not for its community of whales. Each summer several hundreds of pilot whales, members of the dolphin family, are slaughtered in the green fjords to provide food for the islanders. In his feature debut French TV director Vincent Kelner uncovers some surprising angles in exploring this emotive practice known locally as the ‘Grind’.

Jens Mortan Rasmussen has eaten whale meat for most of his life and feels privileged to have grown up in the Faroe Islands: there are no big cities and surrounded by vast open landscapes he enjoys the ability to source his own food from nature. We first see him slicing through a massive chunk of whale meat proud that he has killed the animal himself – one of the 60-90 whales he has so far slaughtered to feed his family. Trying to do it as quickly and as humanely as possible he sees no difference between killing whales, sheep, or battery chickens – who suffer the worst conditions during their short lives – for subsistence. And put this way, he certainly seems to make a point.

Since the 16th century, whale meat and blubber has been a traditional form of nourishment in these remote Danish islands, and most Faroese grow up eating the rich source of protein several times a week. But the islanders do not kill or eat larger whales, and even push them to safety if they stray into more shallow waters, and we see Rasmussen actively helping out when some of the large whales become stranded due to sonar difficulties. Runi Nielsen claim to film the slaughter so that study slaughter methods and try to improve on them.

Faroe Islanders are fiercely protective of their language, culture and history and take great exception to any interference in their way of life, especially from the Sea Shepherd activists who feel passionately opposed to whale slaughter: predominantly vegetarians and vegans, they are actively opposed to animal slaughter, not only in the Faroes but everywhere else in the world. They believe pilot whales to be sentient and sophisticated beings capable of referential communication, and should be allowed to roam free under animals rights protection believe the mammals. Their presence on the islands is a viewed as a menace by the Faroese who claim their new improved methods of slaughter are so much less cruel than they used to be, with improved weapons and less damaging fishing hooks. The islanders feel there is a lack of integrity in the way their country is being portrayed as knee deep in the blood of whales while elsewhere animals are routinely slaughtered humanely (or not, in the case of Halal). A spokesperson for the Shepherds feel that Faroes, a self-governing archipelago, and part of the Kingdom of Denmark, benefit from free trade agreement with the European Union, although they chose to remain outside so they could maintain control of their fisheries, and indulge in whale killing, which is actually illegal in the rest of Europe. Other animal rights organisations are also joining the defence of whales. Maybe it’s the way the whales are rounded up and hunted down ‘en masse’ in a blood-bath massacre that is so upsetting to outsiders.

Scientist Pal Weihe points out that whales are the top of the ocean’s food chain and their health is reflected in the state of the ocean’s polluted water. He claims that the pilot whales also contain high levels of toxic chemicals particularly ethyl mercury and this, according to recent studies, has had a detrimental affect on the brains of the islands’ children. The Islanders are not recommended to eat more that 250 grams of ‘Grind’ per month and startling evidence seems to point to an end to the practice of whale hunting, if not now, certainly very soon. For the time being whalers continue to eat poisoned meat as an act of tradition despite clear indications that it their health.

With its striking visual imagery and breathtaking widescreen images of this remote part of the world A Taste of Whale serves both as an ethnological portrait of a community in flux and informative look at the way animal cruelty is viewed as the world moves towards sustainable practices. Kelner presents a balanced portrait of a controversial topic and the final moments of the film are really hard to watch if you are opposed to animal cruelty.MT