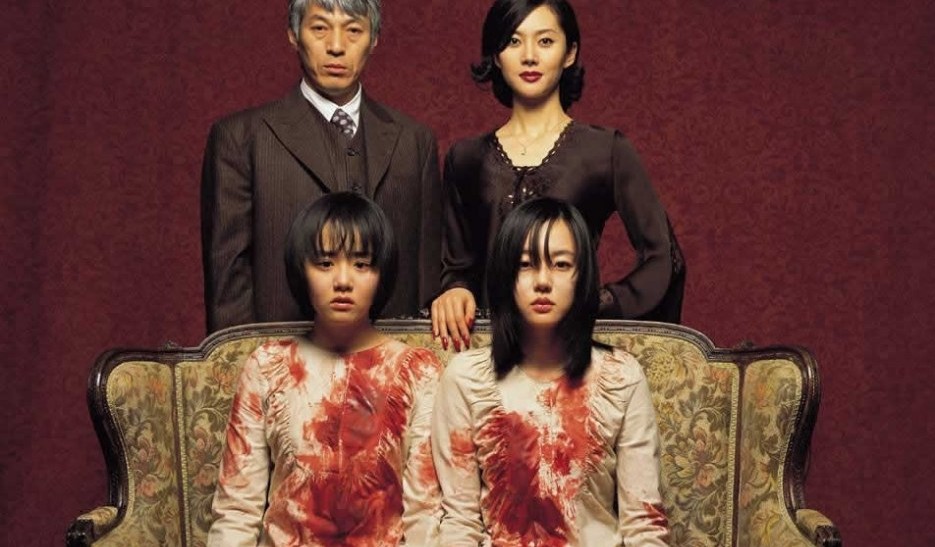 A Tale of Two Sisters is a loose adaptation of a Korean fairy tale called “Janghwa Hongryeon” – meaning Rose Flower, Red Lotus. The film’s association with the colour red is displayed early on when the sister Su-yeon (Moon Geun-young) picks some poppies growing outside the parent’s country home. This blood symbolism, related to a split psychology, gradually becomes more apparent.

A teenage girl Su-mi (Im Soo-jung) assisted by a nurse, is brought shuffling into a room of an asylum to be interviewed by a doctor. Su-mi has thick black hair almost covering her face and recalling the menacing woman of the first Ring film. She’s asked if she remembers her family and what happened on the day she was admitted to the instituition.

There’s a rapid dissolve to her former slightly younger self, and her sister Sun-yeon (Moon Geun-young) arriving at their parent’s country home. This is where we meet their kind but ineffectual father (Kim Kap-soo) and his second wife (Yum Jung-ah). The stepmother’s cold and threatening behaviour proves the oddest in a house where many oddly disturbing things happen. Into an atmosphere of fear and distrust appears the ghost of the real dead mother, a caged bird that’s killed, the visiting sister-in law, who disturbed by the stepmother’s manic storytelling, has an epileptic seizure, strange noises and a murder that perhaps never happened. The sisters become trapped in a house where it becomes difficult to know who’s really the tormented and who’s doing the tormenting.

A Tale of Two Sisters is a psychological thriller/horror film with nods towards the ghost story. Discovering the secret of the family’s unease proves to be a compelling pleasure. Everything’s strongly directed, technically brilliant, very well acted and beautifully photographed. Yet in spite of its emotional power A Tale of Two Sisters is ironically somehow flawed by the plausible mad state of Su-mi. Though it’s never explicitly stated, she suffers from a disassociate identity disorder – a condition creating a perception of things through two different identities.

The film’s psychological underpinning is never fully ‘explained’ by any doctor character. Mystery is a great strength of A Tale of Two Sisters. Combine this with dramatic visuals of commanding beauty (swirls of dark brown lighting, potent reds and a patterned set design of dining room, bedrooms and kitchen are incisively edited to genuine horror film shocks).

However the family’s disturbing behaviour is perhaps revealed by a tendency to over-elaborate on plot detail. There are too many storyline incidents. Ghostly appearances (who really is inside that bloodied bag?) and suspicious behaviour all round is excessively displayed (though never gratuitously so) in the last third of A Tale of Two Sisters. Even after a second viewing and consulting an online plot description, I felt A Tale of Two Sisters couldn’t avoid the charge of artistic error, leading to narrative confusion: mainly because of an unreliable narrator perspective.

Through the prism of Sun-Mi’s madness we begin to get a misleading account of events. It’s not merely a case of the right / wrong actor viewpoint but writer / director Kim Jee-woon’s mistaken choice of viewpoint. A bit too many things happen – is the epilepsy scene really necessary and maybe the ghost of the mother shouldn’t have been repeated with such intensity? The films terrific style works against the story of the fate of the film’s protagonist, so that things begin to falter and stumble, causing us to loose sympathy with sister Su-mi’s anxious state of mind: almost but not quite. For the film has a rich sensual texture prompted by strong and gripping compositions. Perhaps this tension between being a horror-thriller and ghost story isn’t fully resolved. A tendency to let its audience experience too much “disassociation” gradually flaws A Tale of Two Sisters.

Yet putting that criticism to one side, this production stands head and shoulders over many contemporary horror films. For when frightening it equals the best parts of the Ring film trilogy. Not quite a classic horror: but intelligent and good enough for me. Alan Price©2017