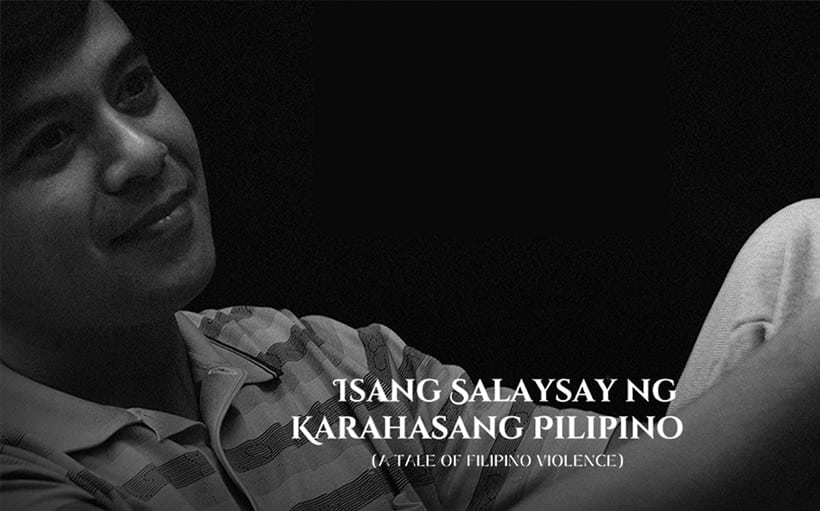 Filipino director, co-writer, co-DoP, designer and editor Lav Diaz once again delves into his country’s rich history from Spanish colonisation to present-day feudalism in an epic drama with touchstones to the present, based on Ricardo Lee’s short story and screen play “Servando Magdamag”.

As the title suggests – this is a blood-soaked ballad of brutal confrontations tracing the life and times of an infamous Filipino dynasty, the violence mostly happening off-screen in the director’s signature slow-burn style that envelopes us into the action. After seven hours we are very much part of his world, and the family feud at its core.

A Tale – shot once again in velvety black & white – takes place in the early days of the dictatorship of Fernando Marcos (1917-1989). Elected President in 1965 he declared Martial Law in 1972 so as to avoid calling an election shortly before the end of his second term, the regime gradually becoming more entrenched. Ironically, his son Marcos jun (Bong Bong) has just been elected president of his country in a landslide victory paving the way for his mother Imelda to return to the presidential palace. She would flee the country with her family in February 1986.

Servando Monzon VI (an impressive John Lloyd Cruz) proves to be a somewhat unreliable narrator, reading from the journal of his ancestor Servando Monzon I who was born in Spain but deported to the Philippines in 1979 after killing his lover, stabbing her 52 times. The founder of the family fortune used slavery to establish the huge and profitable ‘Hacienda’. In one of the early scenes the violent heir Tres Monzon III (Goingoa) is delivered back to his Villa in the Hacienda by ambulance. Suffering from pancreatic cancer, he only has a month to live, but he has been fortunate: family money has saved him from a long prison sentence for his crimes of rape and murder. But his comes uppence has finally arrived, fate delivering the final blow.

Servando is married to Belinda (Orenzio, who is also the film’s co-producer and assistant director). The university educated Belinda sympathises with her brother Delio (Gahom) who is an active part of the NPA forces operating in the vicinity of the Hacienda. Belinda is also taking care of Tya Dencia (Isodro) who has witnessed the 1945 murder of many of the Monzon clan and their women by Japanese forces. One of them, Dolores, gave birth to three children after being repeatedly raped. Dencia suffers from schizophrenia and has fled into her childhood, playing with dolls and singing sad songs. Delio is captured and interrogated by Captain Andres (Ignazio), who later promises a fellow guerrilla that he will be freed if he kills Delio. In the end we hear three shots, suggesting Andres did not keep his word. What follows is a catalogue of killing and corruption – leaving many maimed, murdered and damaged for life – meted out by the Monzons not only to their adversaries but also their own close family in a story that sees Diaz eventually turning the tables to show who Servando really is.

Diaz has made a serial version of the film in colour, and a cinema version in black & white. Crucially, he has chosen to classify A Tale as a cine-novela because, like many of other historical epics, the feature is structured rather like a long novel. The reader – rather like the film’s audience – gets slowly embedded into the narrative. There are no rush cuts, long static shots allow the audience to become at one with place and protagonist. The Hacienda villa, like a theatre set, is filled with sinister foreboding and gloomy shadows, not least because Tres is on his death bed. Diaz avoids any shock effects in a story that always retains an element of surprise. Rather like the doom-laden family mansion of the House of Usher, Servando’s house is tainted by the past. Marcos speaks on the radio while real history is unfolding, and it feels like a real and integrated part of the feature.

Strangely the atmosphere of the pandemic still pervades the film. The immediacy of the moment helps to explain the effect it will have on the audience: a sort of ‘dance on a volcano’ sensation with the same long shot techniques employed by the Lumiere Brothers to surprise their audiences. The poetry and songs (composed by Diaz) bring to mind Melancholia in their ritual function.

And one last point: Diaz’s features should be approached in the same slow, episodic, patient way as a Henry James’ novel, not read in one go. Diaz plans to create a three-part cinema version – the complexities are often hidden in James’ half-page sentences, while Diaz’ films hide their power behind the non-dramatic developments; as with the prolonged death of Tres, who becomes a main protagonist by simply dying, igniting the demise of the Monzon clan and, at the same time, immersing us in this house of death where we simply languish like all the other protagonists.

Patience is the key to entering Diaz’ world, where every little detail is painstakingly viewed from different angles, showing the characters caught in a magnificent spider’s web.AS