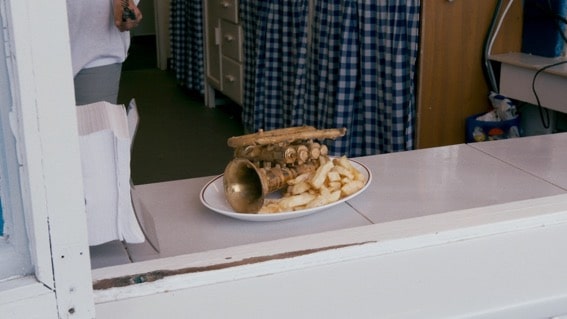 Spanish director Enrique Sanchez Lansch has followed British composer Matthew Herbert for ten years to record his experimental sounds in this rather experimental film that plays out like a performance.

Herbert’s credo is that mankind should listen more closely to sounds, if they want to topple right-wing governments – even though the Kent born composer admits that this target may be too fanciful. The genre-breaker Herbert has a proven track record: over 30 albums, film scores, among one for Ridley Scott, and an Oscar for the score of A Fantastic Woman (although the opening track was actually Alan Parson’s Project classic ‘Time’.

Whether underwater or in outer space, Herbert feels entirely at home, composing even for audiences who are asleep. But it all started much closer to home when Herbert recorded the noises of his newly-born piglets for the rest of their lives – even during their slaughter. He is tired of the repetitive approach to piano and violin, so has learned to play both instruments from scratch, transferring his critique to the cooking of an omelette.

Forty-four eggs are first selected, a bared-footed woman then crunches the shells, the sound creating a sort of entirely new sounds while the omelette is being made. Other sound mixes include people having sex; forests being cut down; and an over-ground train in Berlin. Having lived in the city, Herbert has created a sound Symphony of people dying (79) and being born (183), with his “orchestra” performing the applicable noises like the final breath and first cry.

Mahler’s music is certainly appropriate for a staged funeral, with the composer combining this performance, and discovering that Mahler had to use a flute for a birdsong, whilst the teenage boy Herbert could use a recorder to catch the original sound of the birds.

In the RIAS Berlin radio station, Herbert rehearses his “BrexitBig Band“, to protest against the vote in favour of leaving the EU. “Leave all the fuckers and their hatred behind” is one of the refrains. Having watched Emma swim for 14 hours in the English Channel, we then imagine a love song between an English and French person on the shores of the English channel aka ‘La Manche’.

Tree cutting sounds remind the composer that “we are all living in an emergency situation“. Nevertheless, he still has time to deep-fry his trumpet in a Fish and Chip shop, before ending in space with “the impossible sound of solar winds” and “the sound of virgin lights hurtling through space.”

DoPs Thilo Schmidt and Anne Misselwitz use appropriate images for this cacophony of sounds. And although Sanchez Lansch starts to feel like a mischievous magician pulling too many rabbits to pull out of a hat with his myriad exotic recordings Symphony is certainly inventive and full of weird ideas that occasionally stun and surprise the audience. AS