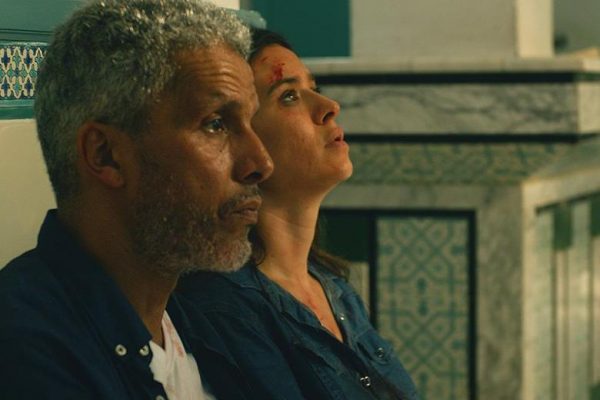 Meriem and her husband Fares seem to have it all – a carefree lifestyle, supportive friends and most of all a lovely little boy, Aziz. Meriem has just been promoted in her managerial job for a Human Resources conglomerate. Life is sweet for this privileged couple. Until tragedy strikes during their drive back from a day out in the countryside. Shots are fired from nowhere and hit the family car, amid shouts of “Allah Akhbar”. Aziz is injured. A blinding rush to the nearest hospital sees the tone shift from upbeat breeziness to heart-pumping terror.

Mehdi Barsaoui’s tense and tightly scripted melodrama makes for a stunning debut feature and subverts our expectations. Films about terrorist attacks are usually set in non-Arab countries so this brave attempt to stage a terror attack in a  Muslim country show courage and a innovation on the part of this Tunisian director, and won him the Orizzonti award for best director at Venice 2019.

But what happens next is both shocking and bewildering. The trauma of Aziz fighting life is compounded by a startling revelation that sends the family into meltdown. Blood tests to work out which parent is most suited to give the child a transfusion reveal that Fares can’t possibly be Aziz’s biological father. Naturally this is devastating: Meriem is aware of her infidelity during a difficult time in their marriage but she had no idea Aziz was not her husband’s child and so she is forced to keep this dreadful fact to herself. This complicates the already fraught scenario as Islamic law forbids organ donations from outside the nuclear family. A long waiting list is their only option as the gruelling nightmare unfolds.

At this point a rather dubious character enters the fray. Mr. Choukri (Slah Msaddak) is the sort of man you wouldn’t trust to post a letter but he attempts to support Fares forcing him into an intractable dilemma and one that money will not necessarily solve. A excellent cast act out this remarkable debut but Bouajila is particularly strong as a successful man of integrity whose masculinity is challenged by a seemingly impossible set of circumstances. MT