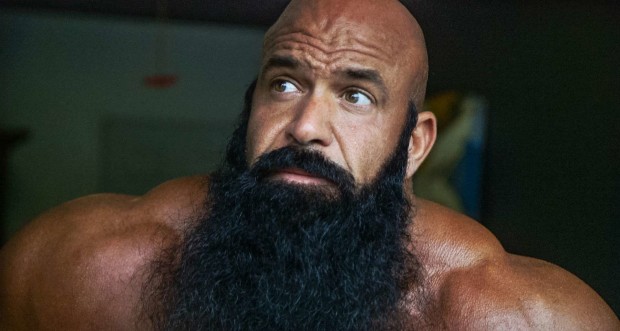 Montreal is the setting for this persuasive arthouse documentary having us believe that extreme body-building is a living art form to be admired, and revered even. It explores the muscle-flexing, grunt-ridden moments dedicated to the practice of corpulent honing for six masculine machos: a personal trainer, a wrestler and four bodybuilders. They are the gladiators of our contemporary civilisation.

Canadian filmmaker Denis Côté is well known for his rhythmic, eclectic documentaries: the first Carcasses explored a ‘car cemetery’; his meditation on animals Bestiaire followed and Joy of Man’s Desiring examined  the comforting cycle of work routine. Here at Locarno Denis Côté has won awards for his dramas Curling (2010) and All That She Wants (2008). A SKIN SO SOFT is his hopeful for this year’s Golden Leopard and shows his genuine almost respectful fascination for a subject that many could regard with disdain or even abhorrence. The film moves with Jaguar-like stealth over the bulbous bodies almost luxuriating in the rippling muscles and satin-like skin of the men who work tirelessly to service their physiques.

First up is the largest of the bunch of gentle brutes who has not only developed his physique but also grown his facial hair to Samsonesque proportions. The camera caresses its ebony rich lustre moving down slowly over his pumped up body that requires a special diet and strict beauty routine. The next man is younger and less developed but again devotes a quasi religious dedication to his physical development. All give little quarter to improving their conversational skills, a fact that must depress and bore their womenfolk who treat them with patience and tolerance.

These are clearly self-regarding types who take their exercise regimen seriously but there is also strangely something rather vulnerable about the way this long-suffering and stoical attention to their bodies makes them seem less powerful emotionally. If there is an opposite of anthropomorphism, this is it. One trainer has a more humorous take on proceedings, bemoaning the less than perfect symmetry of his body. And there is a wonderful scene where these scantily clad beefed-up bodies romp riotously, desporting themselves ‘en plein air’ across a field of cows. With its Kraftwerk style soundtrack A SKIN SO SOFT is magnificent stuff and another truly unique creation from the maverick Canadian director. MT