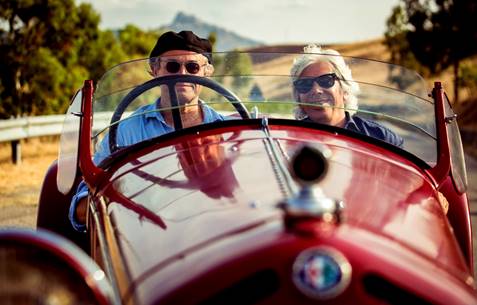 Between 1906 and 1977, the Targa Florio mountain road race in Sicily was much more than a mere sporting event: Much like the Siennese Palio, it was a play with death, performed in front of half a million spectators. Its history is part of the Sicilian identity: heroic, morbid but always glorious, a spectacle – one moment a dream, the next a nightmare. And Philip brings this vividly to life in his short documentary film

We discover how it was founded in 1906 by Vincenzo Florio, member of a cosmopolitan family, who outward-looking, wanted to bring Europe to Italy. The family was well-connected with local artists and authors, among them Count Giuseppe Tomasi de Lampedusa, whose novel “The Leopard” was later filmed by Visconti. Many motives of novel and film reverberate in A SICILIAN DREAM. Vincenzo Florio, though the race would finally bankrupted him, realised the family dream of making Sicily centre stage: for decades the best drivers in the world drove the course, which was insane, with poor safety controls for the drivers – the first cars who drove the circuit did not even have front brakes! Even though the early years brought no tragedies, with spectators lining the course with petrol cans, since there were no petrol stations.

The anecdotes are endless, like the one of the English driver Cyril Snipe, who was so tired, that he stopped and slept for two hours before his mechanic woke him with a bucket of cold water. Snipe re-entered the race and still won. In 1926 the first driver was killed, and the fortunes of the Florio family went into reverse. But between the wars, the Golden Age of sports car racing, saw the local school teacher Nino Vaccarella win the race three times. Still a local hero, his appearance is one of the highlights of A SICILIAN DREAM. After the Second World War, the lack of security of a racing course, only used by donkey carts otherwise, signals the end of the race: the 1977 edtion is abandoned half-way through (and the race for good) after a car crashes into a large group of spectators.

The docu-drama format has wonderful images of the Belle Epoche, with scenes of Vincenzo’s early days, and racing rivalries. The archive films of the race make it look truly scaring, particularly the early years are stunning – the adventurous spirit of drivers and spectators are caught in scratchy black-and-white images. The two main protagonists, Alain de Cadenet and Francesco da Mosto (always so enthusiastic and simpatico) join in with the other classic vehicles in a commemorate race through the sun-blasted landscape. During the filming, De Cadenet meets the son of the farmer who saved his life during a race, pulling him out of the burning vehicle, this way achieving a way of closure.

A SICILIAN DREAM is a true piece of Sicilian history: untamed in its beauty, but nevertheless, to quote De Lampedusa, “it is not a country in love with real progress, but with its languidness and love for death”. AS

ON GENERAL RELEASE AT SELECTED CINEMAS FROM 23 OCTOBER 2015