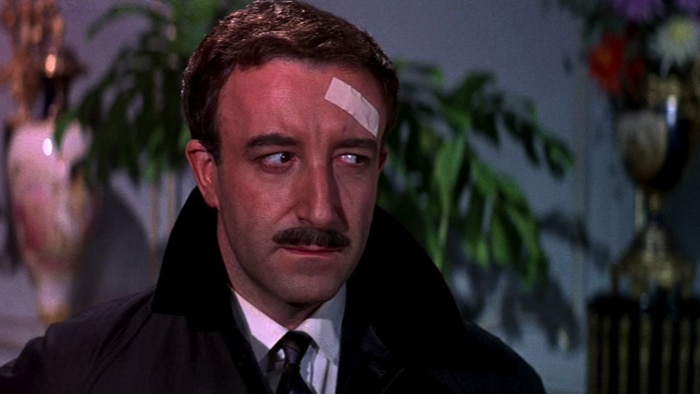 At work most of my colleagues only vaguely knew who Peter Sellers was; usually responding with the faintest glimmer of recognition when I said he played Inspector Clouseau in the Pink Panther films. That A Shot in the Dark – filmed before The Pink Panther had even been released – was the only one starring Sellers not to have ‘Pink Panther’ in the title – it’s actually based on a 1960 farce by Marcel Achard called ‘L’Idiote’ which was a big hit on Broadway the following year with a young William Shatner in the role that became Inspector Clouseau – gives a clue as to why it’s so much funnier than the series that came much later.

The film’s long and tortuous production – the plug had already been pulled on an initial film version directed in 1962 by Anatole Litvak; while pre-release tinkering is evident from two editors being named in the credits and the brevity of the roles of well-known actors like Ann Lynn and Moira Redmond in the film itself – and the fact that Edwards swore (after it wrapped) that he would never work with Sellers again, would evidently make a fascinating book in it’s own right; and the two only reluctantly worked together again after both were starved into burying the hatchet after a long run of flops during the intervening ten years.

As for the film itself, the virtuoso pre-credits sequence outside the Ballon house demonstrates what a class act Edwards was in those days; while it has a script literate enough for George Sanders to invoke ‘Macbeth’. (The dancer, shown in close-up commenting in Spanish on her partner’s dancing in the flamenco club, is informing him that he is unique). And the scene in the car stuck in Parisian rush-hour traffic is more literally like a nightmare than anything even Hitchcock ever devised. Andrew Sarris approvingly observed that it “lurches from improbability to improbability without losing its comic balance”.

Both George Sanders and Herbert Lom (of course) are hilarious, the latter later becoming the real star of the series; and all the way down the cast list Sellers is surrounded by first-rate talent, all like Sellers himself (and later series regulars like Andre Maranne and Burt Kwouk) looking shockingly youthful. It’s also good to see Graham Stark playing straight man to Sellers for once.

Had Sellers died from the heart attack he suffered the following spring this would have made a wonderful swansong; instead his last completed film was The Fiendish Plot of Dr Fu Manchu. ©Richard Chatten