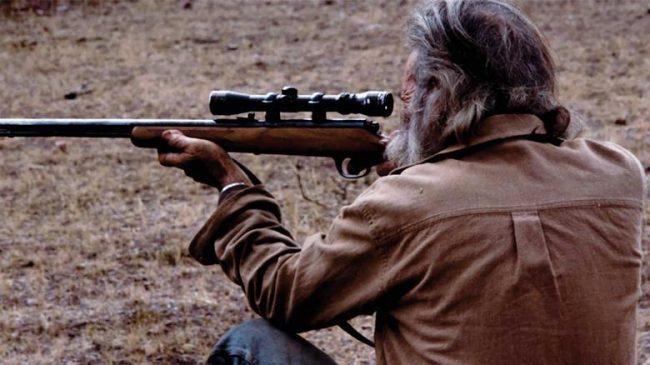 A Lone Ranger of the worst type is how best to describe the unappealing main character in Malloy and Sniadecki’s unsettling documentary that sees a heavily bearded, raddled man living an isolated existence in the Sonoran desert, his only companions his dogs.

With its prescient themes of self-sufficiency and even social distancing this borderlands Western shows how possible it is even in the 21st country to survive as a hunter gatherer far removed from society, a telephone, vehicle and electricity the only mod cons at your disposal. The filmmakers adopt a slowing-burning and detached approach to their subject shying away from any formal narrative and letting the camera drift around following Sundog through his day. Meanwhile a growing tension gradually leads us to believe this intriguing ethnographical portrait will have a more sinister outcome than the one it started out with — Sundog emerging merciless and triumphant having shot a wild boar and leaving it to bleed out in a grim death, clearly not wanting to waste another bullet on the dying animal.

The Senoran desert is a dangerous place to live and full of snakes and poisonous insects, Sundog harnesses a desert toad and milks it for its bufotenin, a tryptamine derivative which when dried and smoked causes psychedelic trips lasting around an hour. He cackles, belches and makes strange whooping noises as he goes about his business – and we also see him doing his business. Later he shares he feelings about his lifestyle in a caustic, slightly embittered tone: “Outwitting the US government and avoiding people I have no affinity for is a win-win situation”. There are occasional glimpses of the US surveillance towers, evidence of big brother monitoring his idyllic wildlife existence. But a coiled snake continually seen lingering in the grass could shape up to be equally intrusive.

What happens next leaves us in no doubt about Sundog’s general disdain for mainstream culture, and the lyrics of a song he sings along to give a clear indication that he has possibly left some emotional baggage behind to seek solace in the wilderness. The film ends leaving us slightly unsatisfied hinting at doom but never delivering the final sting.

Known for his Locarno Golden Leopard nominated The Iron Ministry and El Mar La Mar which he directed with Joshua Bonnetta, Shape Of Things is an intriguing film and beautiful to look at with its striking desert scenery captured by Sniadecki and Molloy who also act as their own editors and composers of the film’s haunting electronic soundscape. Sundog is like the snake in the grass, simmering quietly but ready to strike at any moment if provoked in this compelling walk on the wilder side of life. MT