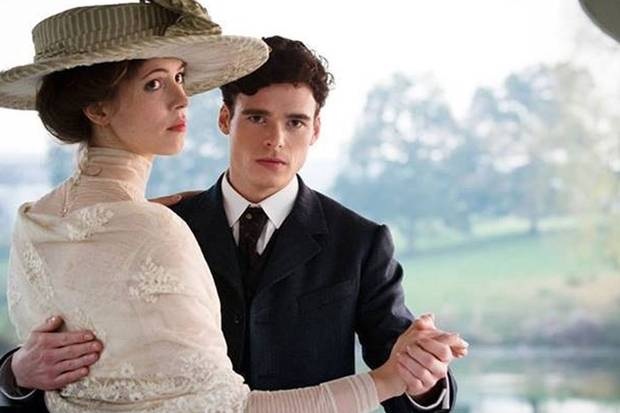 With its Belle Epoque overtones and hauntingly romantic retro feel A PROMISE is set in a German industrial town before the Great War. It stars Alan Richman as an ageing steel magnate whose refined and vivacious wife (Rebecca Hall) falls hopelessly in love with his young assistant engineer (Richard Madden) from a modest background. Based on a novella (Journey Into the Past) by Austrian Stefan Zweig, one of the most famous writers during the 1920s and 30s, it questions whether real love can last forever, when a young couple promise to continue their romantic liaison even after the privations of the First World War.

Written and directed by Patrice Leconte (The Hairdresser’s Husband) A PROMISE premiered at the Venice Film Festival in 2013, where Leconte described his film as “an intimate, troubling and compelling love story that delves into the lasting power of passion”.  Well, there’s nothing new about the idea of falling hopelessly in love, but this story champions romantic passion as apposed to the instant gratification of sex and physical chemistry that is now a more popular subject-matter: A PROMISE explores whether love can survive time, distance, betrayal or even War: or as Oscar Wilde put it, “Time nor Tide can never sever, those whom love has brought together”.

So, Romance, The Great War, magnificent costumes and an enchanting setting enhanced by Eduardo Serra’s elegant visuals – all perfect ingredients for a bodice-ripping ride – what could go wrong? Rebecca Hall is perfectly cast for the role of Lotte Hoffmeister and her feminine appeal as a woman receptive and ripe for passion is beguiling. As Karl Hoffmeister, Alan Richman’a masterful bearing and powerful personality shines through and despite suffering from a heart complaint and no longer (presumably) able to satisfy his wife in bed, his mental strength generates a strong presence of masculine integrity.

But Richard Madsen fails to convince as the young and vigorous lover in the throws of romantic turmoil. He pales into insignificance alongside this Victorian power couple, generating about as much sexual magnetism as a sick child.  This is not helped by Gabriel Yared’s nervous score that irritates rather than anticipates the excitement of romantic undercurrents.

Leconte’s direction also wavers midway lacking much needed reference to salient socio-political developments of the era in contrast to the stifling potboiler with its occasional forays into the Hoffmeister factory. After being separated geographically and emotionally by a break-down in communications due to the war effort, the narrative recovers towards the end as the couple reunite against the grim reality of 20th Century Europe and the rise of Nazism. But this is not enough to set the night of fire as anticipated, and in the end Leconte delivers a stolid period drama that feels dated despite its potential for moving romantic impact and long-winded despite a running time of only 94 minutes. MT

Now on general relelease from 1 August 2014