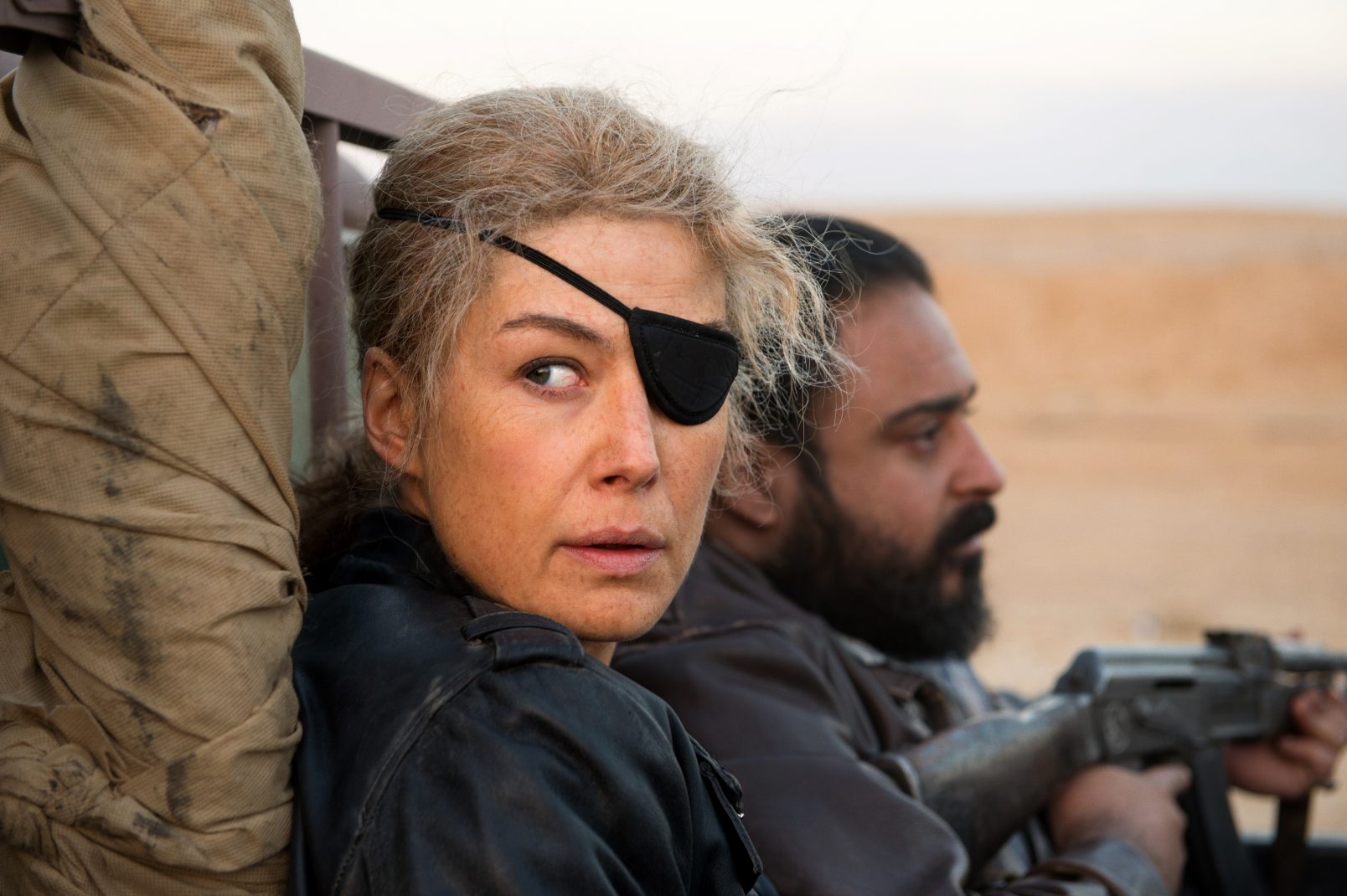 As bio-pics go, Matthew Heinemann City of Ghosts) makes a decent stab at showing the ambivalence of his courageous real life heroine, this case American-born war correspondent Marie Colvin (1956-2012). Strangely enough, it’s not the war scenes that look artificial, but the scenes of Colvin’s private life that sometimes look downright clumsy. But Rosamund Pike’s brilliance as Colvin overshadows everything.

Bookended by scenes from Homs (Syria), where Colvin was targeted and killed by Syrian forces in 2012, just after giving a passionate report about the Assad’s Syrian genocide, Heinemann goes about the last twelve years in Colvin’s life with a parallel montage of her private and professional life. Having lost an eye covering the war between the Tamil Tigers and the Government in Sri Lanka in 2001, she returned to London to receive the Foreign Reporter of Year award for her work at The Sunday Times, whose editor Sean Ryan (Hollander) is featured thoughout the narrative as an personal friend. (The real Colvin was married twice to Patrick Bishop, and to war correspondent Juan Carlos Gummuccio, who killed himself). After discovering the mass graves of POWs from Kuwait in Iraq, meeting freelance photographer Paul Conroy (Dornan) and reporting from Marjah in Afghanistan, Colvin had a mental breakdown, and sought help for PTSD (Post-Traumatic Stress Disorder). A wealthy new lover (Tucci) offered her a way out, but she returns to work  with Paul and does one of the last interviews with Mohamed Gaddafi, whom she had met as a very young journalist, before her last assignment in Homs.

Based on the Vanity Fair article by Marie Brenner and written by Arash Amel, Private War shows Colvin as having an addictive personality: to alcohol (since the age of fifteen), nicotine and war, but not necessarily in that order. The recurring images of the horror she witnessed – one aspect of PTSD is that these images are not ‘stored’ in the part of the brain where normal memories reside, but have ‘intruded’ in the here and now – making everything worse. Colvin was afraid of growing old – perhaps even more than of dying young. She had an image of herself that she needed to defend and save at all cost. And wanted to filter out the horrors of war, for her readers. But she was also aware of the nature of these readers: a pampered Western audience, ready to cry and give donations, but then equally prepared to forget and return to the safety of their lives. Colvin suffered from these contradictions as much as she suffered from her own: she wanted to make a difference, but at times she could only function with the help of drugs and casual sex – “I always end up with the psychopaths”. But she was a noble warrior, and deserves to be remembered. Heinemann got it just right: A private War is not a monument, but a tribute. AS

NOW ON RELEASE NATIONWIDE from 16 February 2019