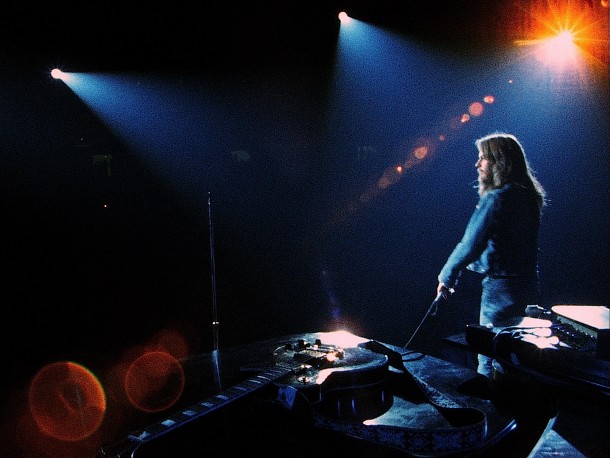 Shot between by Les Blank between 1972 and 1974 at the compound of singer/songwriter Leon Russell in Tulsa, Oklahoma, A POEM IS A NAKED PERSON could not be shown until 2015 because of rights issues involving the star singer and the director. Blank’s son Harrod finally got in contact with Russell to resolve these.

Les Blank (1935-2013) was a veteran filmmaker and as eccentric as his many documentaries featuring among others, director Werner Herzog in Werner Herzog Eats his Shoe. One reason for Russell’s long resistance to having the film shown was that he did not always appears centre, quite literally. Blank focused on the lively artist community in Tulsa where painter Jim Franklin painted a mural resembling nightmares from Hieronymus Bosch – while also sweeping out an empty swimming pool and removing baby scorpions. Other offbeat attractions are a glass-eating parachutist and a demolition job of a large building.

Singer/Songwriter Leon Russell had performed with Bob Dylan, George Harrison and Joe Cocker. He had been a member of the Wrecking Crew since his early teens and recorded with The Byrds, Frank Sinatra and Herb Alpert. But Blank was also interested distilling the environment: the old-fashioned storefronts of Tulsa; the floating motels; the beautiful women, ordinary folks and Tractor Pull competitions.

Les Blank being, as usual, his own DoP, relied mostly on sound technician and editor Maureen Gosling, who collaborated with Blank over twenty years on films such as Burden of Dreams (1982) and In Heaven, There is No Beer (1984). For A Poem is a Naked Person, “we had about fifty to sixty hours footage”. Blank’s concert shots of Russell are a sweaty affair and the studio sequences are intimate. Harrod, who was nine years old when shooting started, was often present and remarked that his “father’s penetrating camera work was a result of luck and patience. He would be filming with one eyes and looking out with the other ahead of the shoot, He would anticipate when to move the camera.” Still, he missed one particular shot – when Russell and Bob Dylan tried to get away in a canoe to seek out some privacy.

Blank cut about twelve minutes of the original, mostly slow scenes, having no patience with long shots; he wanted authenticity, as seen during a concert performance when the camera is on Russell’s shoulder during the honky-tonk melody of ‘Tight Rope’, and the next moment we see a member of the crowd literally in ecstasy. Overall, A Poem is a Naked Person is much more like a music documentary, it is a time capsule from a bygone era where everything was meant to be an excuse for a great party, and music and all other art forms were a way of life. AS

OUT ON RELEASE AS SELECTED ARTHOUSE CINEMAS FROM 8 JULY 201