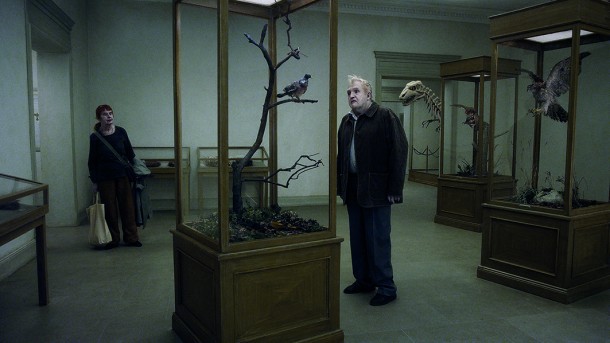 To paraphrase Chaplin, life is a tragedy in close-up, but a comedy in long-shot. That’s the spirit of Roy Andersson’s latest, dizzy, brilliant film. The film’s first three scenes offer slices of death: a man suffers a heart attack opening a wine bottle; a dying, wailing mother prizes her handbag of jewellery from her money-grabbing kids; a dinnerlady offers up the abandoned beer of a gentleman who has just collapsed and died in front of her. They’re all ferociously funny scenes. Why? Because we’re only human.

Pigeon’s characters may be acting a tragedy of their own making, but it makes for a warm, funny and beautiful movie, of the kind that reflects our own trials and tribulations and forces us to put them perspective, to laugh in their face. Yes, it’s that good.

The film concludes Andersson’s ‘Living’ trilogy (after Songs from the Second Floor and You, the Living), each film released seven years apart. His latest has a similar series of related vignettes, most comic, contemplating something greater through the banality of everyday existence. If there is a through-line, it’s led by a pair of travelling salesmen Jonathan (Holger Andersson) and Sam (Nils Westblom), skating in and out of their own miserable lives amongst the memories and dreams of those they meet. Selling novelty gifts:“extra long” vampire teeth and “laughter bags”, as well as the latest “Uncle One-tooth” mask that they hope will be the next big thing. They know as much as we do that it won’t, their products so absurd they mock themselves.

Andersson meticulously crafts each set-up – he took four years to make the film – and yet each scene catches something serendipitous, as if captured by magic of the camera’s apparently arbitrary medium-shot length (of course, it isn’t). Some sequences are stunning: Jonathan and Sam are lost trying to find a shop called “party” (the existential joke is surely intended), and enter a shabby café to ask directions. While there, the huge army of King Charles XII march outside on their way to defeat at Poltava. Here’s a Swedish national hero reduced to a simple man asking for sparkling water. Later, in another period scene, 19th century English colonists load slaves into a furnace. Their screams squeeze through a series of trumpets into beautiful brass music.

There’s also a haunting repetition of The Battle Hymn of the Republic (better known as “Glory, Glory Alleluia”), translated to suit various settings from war marches to the melody of a barmaid asking for a kiss. The original song was about the American civil war – is the director contemplating a split in man’s soul between hope (that characters here show) and the reality that exists? Who knows, but it’s unquestionably moving.

Pigeon is an absurdist drama for today, and Andersson an heir to Ionesco or Beckett on film. To the director, we’re a tragicomic race: we so long for company and gratification, but dying alone is our lot – again, it’s what makes us human. But he’s asking us to take heed of another of Chaplin’s timeless quotes: “To truly laugh, you must be able to take your pain, and play with it”. Ed Frankl.