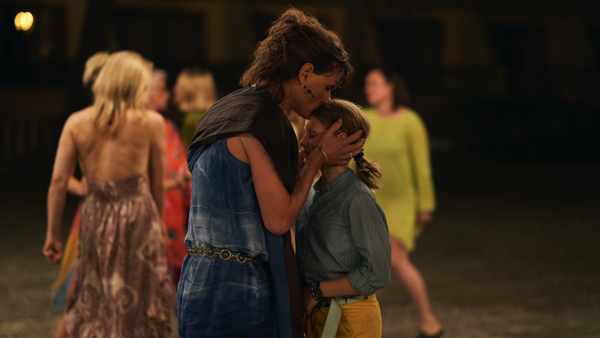 Dutch filmmaker Malou Reymann directs and co-writes this thoughtful family drama about a sex change: the football mad father decides to live in a woman’s body, having fought his owns demons to reach a decision. His wife and two young daughters are left to cope with the shock of their new reality in small-town middle-class Denmark.

It all starts with the birth of the youngest daughter Emma who has hardly left the womb before she is watching a rowdy football match sitting on her father’s lap. Fast forward to her preteen years (played by Loholt) as a striker for the local girl’s team, father Thomas (Folsgaard) in rapt attendance. The whole family is flabbergasted when he admits to being on hormone replacement therapy in preparation for the sex-change operation in Thailand. Although his wife Helle (Ronlolt) feels alienated; teenage daughter Caro (Ranthe) takes it all in her stride, criticising Emma for not accepting Thomas as ‘Agnete’. A therapist doesn’t help matters, and Emma finds it difficult when Agnete refers to ‘her femininity’, insisting the family use her new name in public.

Caro’s big family confirmation celebration passes without incident, Helle even dancing with Agnete. But Emma is awkward around her ‘new mother’, who wants to be referred to as such in front of Dutch strangers on a family holiday on Mallorca. Emma hits the bottle after hearing her friends slagging Agnete off (“he had his dick cut off”). This is all too much for Thomas/Agnete who makes some radical changes.

Reymann interweaves the beautifully crafted narrative with home videos of the daughters at a young age, showing how things change. Loholt is undoubtedly the star of the show in a performance that perfectly conveys feelings of bewilderment when her football-loving dad suddenly pretends to “know nothing about football”, in a bid to cosy up to women in his new gender status.

If Reymann is critical at all it is when Thomas overdoes the female angle, showing a distinct lack of sensitivity towards Emma and her efforts to take it all onboard. Occasionally erring on the didactic, A Perfectly Normal Family packs in the small details in a texturally rich drama, seen from Emma’s perspective, adjusting to the new status quo without the emotional filters of adulthood. Never melodramatic or sentimental, Reymann’s debut is a mature and measured experience of modern sexuality. AS