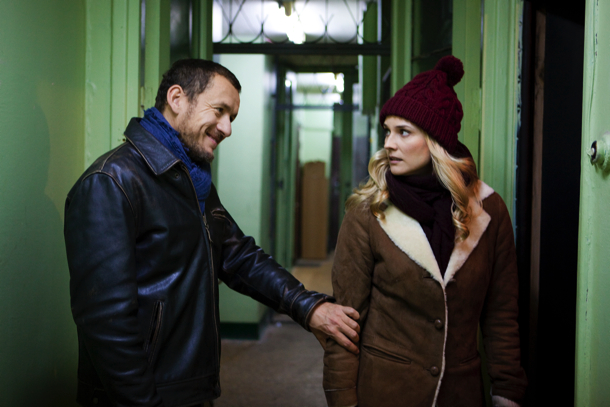 Pascal Chaumeil’s follow-up to the very enjoyable Heatbreaker has Diane Kruger, wildly miscast, as a woman (Isabelle) who wants to marry her goofy long-term partner Pierre (Robert Plagnol), the only drawback being an old family curse where, for no apparent reason, all first marriages end in divorce. So we have a 21st century rom-com with a premise from the Dark Ages. Inanely, Isabelle decides to break the curse by splitting up with Pierre in order to marry the first poor sucker she sets eyes on. And it just happens to be Jean-Yves (Danny Boon) who is both irritating and unattractive, like the rest of the cast in this fatuous formulaic farce which is about as fresh and easy on the eye as a mouldy doughnut, and equally hard to digest.

For a start, Diane Kruger is simply not cut out for comedy: she has the delicate features and appeal that cries out for meaningful romantic ice-maiden and, for most of this, as Isabelle, she looks at Dany Boon as if he were something nasty on the bottom of her shoe while supposedly falling for him. Making simperingly soppy love declarations are simply beneath her, but she’s required to do so in the painful final scene. Secondly, A Perfect Plan is co-scripted by four relatively new writers who appear to have drawn a blank on humour and opted instead for a check-list of commercial plot lines and well-worn rom-com tropes; ensuring inertia for most of the overlong running time. Definitely one to avoid, like another medieval curse, the Plague. MT

The project’s smug over-confidence is exhibited from the opening scene, in which it demands audiences accept that in modern Paris, a family of upper-middle class intellectuals still believe that a curse hangs over the females of their clan. For no established reason, it seems every first marriage is doomed to fail; a dinner party of relatives tell the story of Isabelle (Diane Kruger, struggling with ‘likable sweetness’ after a career of ‘tormented iciness’), who is so fearful of losing her true-love Pierre (Robert Plagnol) to her pre-ordained destiny, she devises an elaborate plan to sucker some poor schmuck into marrying her then annulling the nuptials immediately, to get the curse out of the way.

In entirely predictable fashion, Isabelle’s plan goes awry and she is thrown into an African adventure with nice-guy travel writer Jean-Yves (superstar Dany Boon, surely playing out the most under-developed lead of his career). She woos him just enough for her plan to play out, but then flees his company once back in France. Her sense of regret and, perhaps more importantly, his sense of betrayal is given such short shrift that”¦well, if the couple involved don’t care what they’ve been through, why should the audience?

There’s always an argument to be made that the people who enjoy these unrealistic romantic comedy concepts (While You Were Sleeping, How to Lose a Guy in 10 Days) aren’t looking for more grounded love stories (Annie Hall, The Goodbye Girl, Modern Romance, When Harry Met Sally”¦). If so, grab your choc-tops and enjoy. I’d argue that you are buying into the laziest, most contrived genre polluting both multiplexes and art-house venues at present. But to each of their own, I guess.