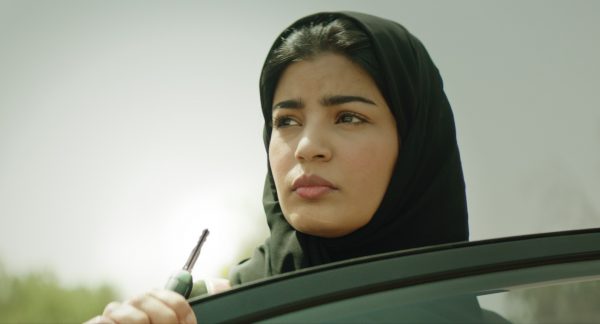 Haifaa Al-Mansour’s latest drama returns to small town Saudi Arabia where a stong-willed woman fights for political power. With its strong elements of a fable, and full of  ironic humour A Perfect Candidate feels very much like a grown up version of the Saudi director’s stunning debut Wadjda.

Maryam is played by a brilliant Mila Al Zahrani in her debut. A leading hospital doctor in a Saudi town, we see her driving through mud and dust to reach the clinic. There she is challenged almost immediately by an old man, who has suffered injuries in a car crash. He is adamant not to be treated by her and Maryam leaves him to the male nurses – who diagnose his spine injury incorrectly – the result being that Maryam has to perform surgery on the still unwilling patient. At home, Maryam lives with her two sisters Selma (Hilali) and Sara (Awad). Their mother, a famous singer, has recently died, and father Abdulaziz (Abdulraheem), an oud player, is on tour with his band. Maryam had planned to fly to Dubai to attend a conference and further her career, but at the airport she is banned from boarding as her father’s travel permit has run out – no Saudi woman can travel without male consent.

Abdelaziz and his fellow musicians come under attack from fundamentalists against music being performed publicly, Maryam tries in vain to reach him, but finds herself presented with the opportunity to be a candidate for the local council where she deals with a condescending, ignorant clerk. With the help of sister Selma, a photographer, Maryam starts her campaign with the onerous but vital task of  rebuilding the mud road leading to the hospital, which has caused massive disruption. Miraculously, the sitting councillor starts the road work immediately.

It is the little details that makes this a winner – the scene where Maryam manages to connect a cable during an otherwise rather disastrous video shoot for her campaign; she puts the men to shame as a woman being able to solve a technical problem that eluded the male professionals. Sure, the outcome may not have added votes, but the message hits home. By the end, Maryam gains a staunch supporter in the old man whose life she saved with her surgery.

Let down by its rather second-rate visuals – DoP Patrick Orth’s images are rather basic, but Volker Bertelmann’s score makes up for it. The ensemble acting and Al-Mansour’s sensitive direction makes this another success for the Saudi filmmaker  AS