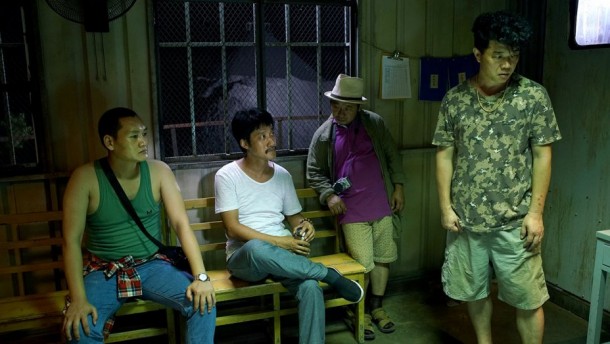 Poet turned director Han Dong collaborates with festival head Jia Zhangke in this darkly satirical literary curio that mulls over themes of crime and bureacracy during one night in a rural Chinese hostelry.

One Night on the Wharf’ serves as poetry in motion when q group of intellectuals hole up in a waterside bar to spend a long night debating and shooting the breeze. They are poet Dingzi (Chai Chenggang) Wang Shu (Liang Jingdong) and Ouyang (Han Sanming). Dingzi is the first to get his coat, and leave for the ferry which he promptly misses having flirted with a young woman in a kiosk, but it’s not clear how he ends up at odds with local thug Baipi (Gao Bo), over something in his luggage, who calls in security in the shape of Xiao Li (Chen Ji), a sort of back-up officer for the local police. Things go from bad to worse as the jobsworth Xiao Li gets involved and the piece breaks out of its chamber mold and into the following morning’s ferry where Dingzi and his mates come face to face with bumbling Baipo for a showcase showdown.

The film offers up a sometimes flawed but always entertaining and poetic slice of Chinese life involving the dynamic at play between the powers that be, the intelligentsia and the wayfarers. Its mixed cast of professionals and newscomers give the piece a naturalistic kick and Zhou Yunpeng’s perky score punctuates proceedings to great effect amd the whole ensemble looks slick amd professsional. MT