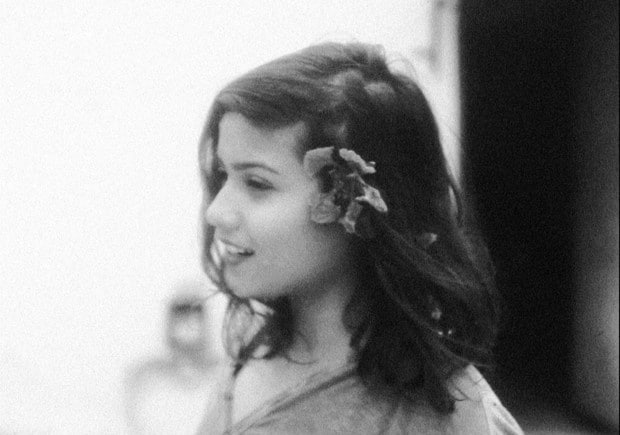 Indian director/co-writer Payal Kapadia, whose short films have been awarded numerous awards, returned to Cannes in 2021 with her first feature documentary A NIGHT OF KNOWING NOTHING, winning the “Oeil d’Or, Prix Documentaire” for best documentary film of the festival. Poetic as well as politically engaged, A NIGHT is a collage made from home videos, archival footage, CCTV recordings and scenes shot from mobiles.

The feature unfolds in an around the campus of the ‘Film and Television Institute of India’ in Pune where letters and a box of clippings and letters written by a female student, simply called L, who was writing to her boyfriend K. The love letters, soon became more and more politically engaged. K. had left the campus, and was literally imprisoned by his parents, for dating the lower cast L. Arriving back. he did not even speak to L, obeying his parents. Now L.s letters were written not to K. but “the man he could have been, or the one I loved once”.

The story dates back to June 2015 when the Modi government, after a landslide victory at the polls, took over all aspects of public life in India introducing their Hindi nationalism to the whole country including the Film and Television Institute. Gajendra Chauhan, who rose to fame in the 1980s as an actor in soap operas, was named the new director of the Film School, his only qualification was his rabid espousal of Modi’s politics. These involved raising tuition fee by 300%, which particularly hit Dalits (formerly Untouchables) and lower cast students the hardest.

The students called a strike which went on for several months. The Police were called in by the government, female students were threatened with rape by the police officers. Violence spilled over to other universities. L, voiced by Bhumisuta Das, edits the films of friends, before engaging more and more in the strike actions. The students’ main slogan was “Eisenstein, Pudowkin – we shall fight, we will win”.

Students graduated with a much different perspective than before the strike. They now had to find a way to make films for Dalits and lower class members, who were repressed by the Modi government. L writes: “We must make sure the ones who make the shoes for the rich, or harvest their food, have a voice”. It is obvious her own experience with her ex-boyfriend played a large part in her politicisation.

DoP and editor Ranabri Das create a dramatic arc showing the escalation of police violence, and the students’ reactions. Like L, many students had started out as proponents of art-house films, but the experience of state violence changed their outlook dramatically. Apart from K that is, L asking in one of her letters, “how could you be so strong when the police attacked, and so vibrant and in the meetings when you give in so easily to your parents”.

A NIGHT is a vibrant kaleidoscope of film styles and personal experiences which suddenly become entwined in the vicious circle of police brutality. L’s identity is changed by outside forces and she emerges no heroine, but no victim either. AS