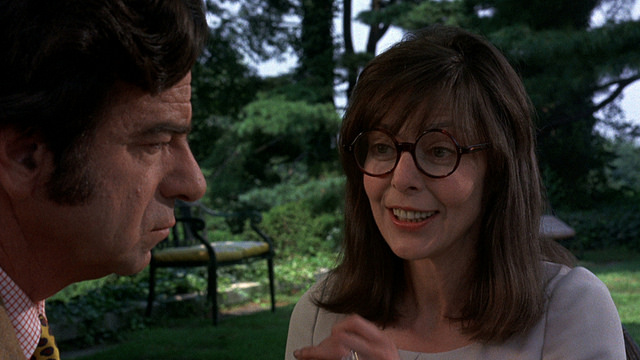 Elaine May, who stars here in her directorial debut, was a one time winner of the Razzie Award for Worst Director (Ishtar).  A fine comic actress  (in Woody Allen’s Small Time Crooks) and director in her own right, she also writes witty screenplays and has served uncredited as a script doctor on Labyrinth, Wolf, Reds and Dick Tracy, amongst other big hits.

She bases this engaging comedy drama on Jack Ritchie’s short story: ‘A Green Leaf’. It’s about marriage, a subject she is familiar with having had four husbands during her 90 years. Walter Matthau plays her co-star Henry Graham, a man who has run through his entire inheritance and appears to have no way of gainfully financing the rest of his life: “I do have skills to the effect that I’m not disabled.” So he hatches a plan with the help of his butler – to marry wealth, in the old-fashioned way.

Taking a short-term loan from his mean-spirited, self-indulgent uncle Harry (an amusing vignette featuring James Coco) who offers him money with the following proviso: he has six weeks to meet a rich woman, get married AND repay the debt; if he fails he must hand over his worldly possessions including his prize vintage (unreliable) Ferrari.

Henry’s foray into dating provides most of the laughs. Rushing around the country he desperately seeks out rich widows – he’s no spring chicken himself – but no one seems appropriate, let alone normal  (“I have found peace in Connecticut, what else is there” says one sparky candidate). Finally, a chance encounter with a wealthy but clumsy heiress (May in fine form) proves to be the answer to his prayers. An attractive botanist, Henrietta Lowell is kind-hearted but socially inept: (“She’s not just primitive, she’s feral” remarks Henry to his butler).

But tie the knot they do and Henry masterminds the honeymoon down to the last detail. In a twin-bedded room, Henrietta’s Grecian style nightie makes for a challenging seduction scene with neither of them being able to fathom out how to get it on or – more importantly – off. Henrietta then insists on taking enormous botanical specimens home and, on arrival at her palatial residence, the housekeeper, Mrs Traggert, gives Henry the glad eye as he proceeds to take charge of the household’s extensive domestic staff. Firing them one by one for being fraudulent, he retains his own butler, Harold (George Rose in a delightful double act with Matthau). Meanwhile, Henry works on how to get rid of his new wife, but doesn’t quite bargain for what happens next.

Walter Matthau is sensational in the lead role, managing to exude humour, style and a wicked charisma as Henry Graham. Elaine May plays Henrietta as a ditzy but appealingly naive woman with her heart in the right place and a cunning twinkle in her eye. MT