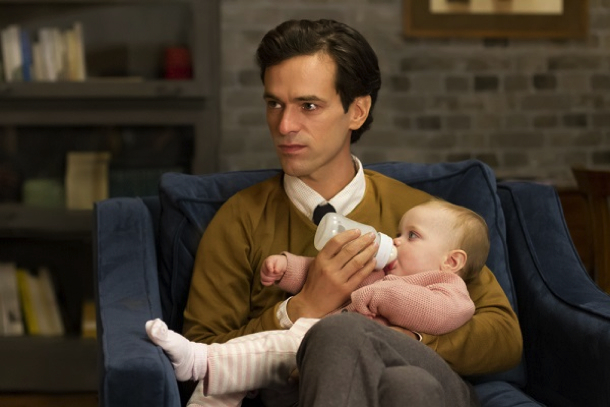 There are shades of Almódovar too in this subversive domestic melodrama that takes place somewhere in suburbia in contemporary France. Ozon’s recent films have all dabbled in the sexual dynamics of their seemingly sorted protagonists. And he’s well known for his tongue in cheek approach to the narrative. The upshot is that sexuality can be a distinctly moveable feast that often takes us by surprise, with feelings of desire or even repulsion emerging, sometimes inconveniently and when we least expect it, and between the most unlikely suspects. In the House upturned smug coupledom with some surprising revelations and A New Girlfriend develops this further in a story that sees sudden tragedy rocking the status quo of an outwardly loved-up young married couple.

Wealthy and good-looking, Laura (Isild Le Besco) and David (Romain Duris in frisky form) start their new lives together in the faux splendour of a picture perfect housing estate, very similar to the one in Terrence Malick’s To The Wonder. But when Laura dies leaving baby girl Lucie, her best friend Claire (Demoustier) is naturally devastated, and drawn into the circle of grief as the godmother of the little girl. Clearly David must now be Lucie’s mother as well as her father, and it seems he’s taken the female role really seriously, as the heartbroken Claire soon finds out. For her part Claire, has also taken her grief to new heights to the detriment of her marriage to Gilles (Raphael Personnaz). But when her husbands’s sexual-healing fails to work, Claire takes compassionate leave and heads chez David for tea and sympathy.

Bereavement has brought out the feminine side of David and, to Claire’s surprise, she finds him dolled up in Laura’s clothes complete with a blond wig and saucy underwear. Unfortunately, Duris is one male actor whose strong masculine looks can never make him look feminine. He certainly has the chops but his heavy jawline and thick eyebrows are more suggestive of a pantomine dame than an androgynous siren in cross-dressing. There are plenty of guys out there who look pretty in long hair and eyeliner – but Duris is not one of them. So when he turns girlie, the look is weirdly grotesque and mildly frightening, rather than sexy and seductive. Maybe that’s was Ozon’s intention. As the saying goes “there’s nowt so queer as folk”

David suddenly develops a desire to go shopping and Claire, in an act of female solidarity indulges him in a date in the local shopping centre. Gradually Claire buys into David’s sexual awakening, sympathetically aiding and abetting him with make-up suggestions and underwear advice, eventually transforming him into her new best friend “Virginie”helping herself to get over the loss of Laura.

Although Oxon is clearly pushing the boundaries on heterosexuality and role-play he doesn’t denigrate David/Virginie, and there is nothing sexually provocative about this change in circumstances. With clever casting, he could certainly have pulled off something quite sensational between David/Virginie and Claire (and it wouldn’t have just have involved an Agent Provocateur thong).

Using a clever selection of songs from the archives, Ozon indulges David/Virginie’s desires to the limit and Duris certainly gives the role depth, clearly enjoying the thrill of his female guise and all that it entails. But Claire and Virginie’s sexual chemistry fails to materialise, remaining firmly in the ‘just good friends’ camp. A reference to Gilles and David’s sexual linking also fails to ignite, but there’s enough complexity at work in the performances to keep things fun and fluffy despite some longueurs. In this inspired new twist on bereavement therapy, Duris and Demoustier keep things tender rather than soppy in their mutual grief over Laura, and a surprisingly upbeat denouement makes for an entertaining watch. MT