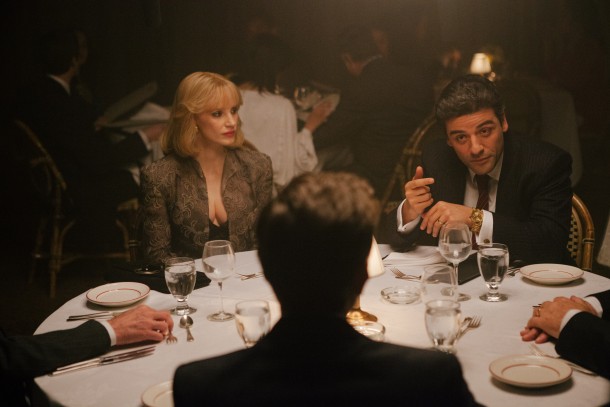 The seventies was a dynamite decade for American crime drama: Chinatown, Taxi Driver, The French Connection, The Parallax View. A Most Violent Year wasn’t made in the seventies but it feels as if may have been. Writer, director J C Chandor’s third feature is a thriller, rich and redolent with promise: well-rounded characterisation; slow-burning narrative; subtle performances all topped with 21st century production values – and superb on the finish. From the opening titles, Chandor shows us that this is a film to be savoured; a grown-up film that will stand the test of time.

This superbly imagined drama takes place in 1981, according to Chandor, one of the most violent years for New York City crime. Like his previous drama ALL IS LOST, it takes its time to build a storyline but makes up for this with a sustained low-boil tension, gradually drawing us deeper into the intrigue and masterfully navigating towards a surprising denouement marking Chandor out to be a rare talent in the making. Oscar Isaac recalls Al Pacino’s performance in The Godfather: mesmerising, skilful and wonderful to look at. He inhabits his role, as decent businessman Abel Morales, with integrity and confidence. Endeavouring to stay on the straight and narrow as corruption seethes from every crack in the City’s pavements, Morales is an immigrant who started life as a truck-driver and married the boss’s daughter, Anna, (Jessica Chastain in a career-defining role) acquiring the gasoil importing business from her dodgy-dealing father, he has made a clean breast of the family business and intends to keep it that way.

Along the way, Chandor paints a picture of middle-class struggle, borrowing and risk-taking, building up relationships with clients and associates while keeping a beady eye on the competition. With Chastain’s Anna he crafts a credible chemistry: the two are partners and equals both in the sleeping and working sense. Sexuality frizzles in their every scene together. She is a woman who knows how to massage her man’s ego and when to up the ante, how to look attractive while keeping the books: but very much her father’s daughter, as we eventually discover. Theirs is an empowering partnership that would make any modern couple envious: the kids are well in the background, not pawns to be traded on the foreground of this marriage.

Abel prides himself on his upwardly mobile vision, still retaining the personal touches of his immigrant Latin background. Acquisitive, he has bought his family a “classy” mansion that would make any footballer envious of. His sales strategy is in line with Dale Carnegie’s: “Keep the eye contact for longer than it feels comfortable” his sales patter full of faux honesty “We’re never going to be the cheapest,” he advises, “so we have to be the best.”

But in this very violent year in NYC, his gasoil company is engulfed in a crime wave of its own: his drivers are being robbed at gunpoint and pistol-whipped. Even his family isn’t safe from a late-night armed prowler, whom Abel confronts with a baseball bat, in true macho style. This all puts in jeopardy his plans to borrow money to acquire a waterfront fuel terminal for easier delivery direct from barges (that can bring the gasoil straight from the offshore tanker) and give him a great profit margin. And the district attorney is fingering his business in a massive malpractice investigation.

Chandor manages this all masterfully with magnificent widescreen vistas of NYC and more intimate scenes that keep us in the picture, enjoying the moment, showcasing Chastain’s lush Armani fashions and Isaac’s exquisite tailoring, well-toned physique and quiet and authentic conviction while always maintaining an uncomfortable tension accompanied by Alex Ebert’s occasional organ score, then pumping up the adrenalin with shootouts and heart-stopping car chases. The scenes with his one of his threatened truck drivers, a fellow Hispanic ( Elyes Gabel) add a certain texture that is meant to add contrast to Abel’s success story, but instead feel slightly overplayed and melodramatic.

A Most Violent Year doesn’t tell us anything new, but what it does, it does extremely well and sets Isaac, Chastain and Chandor up there as artists at their peak. Ultimately this is a story about ‘the American Dream’. Support cast are also superb: there are interesting vignettes with Alessandro Nivola as a soigne Upper East Side competitor, Jerry Adler as an Orthodox Ashkenazi money lender and a world-weary Albert Brooks as his right-hand man. But most all this is a trip to New York at its best, the iconic skylines with the Twin Towers, the old-fashioned cadillacs, and streets deep in snow and a classic core from Marvin Gaye’s ‘Inner City Blues’. MT

ON BFI PLAYER and DVD