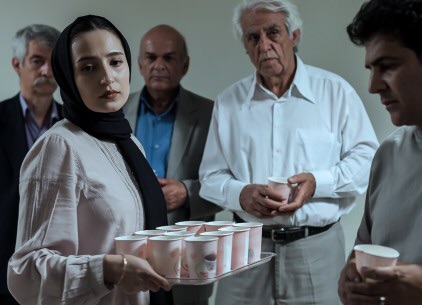 So it seems Jafar Panahi won’t be the only subversive Iranian voice to be heard at the Berlinale this year. Apparently slipping through the cracks of that country’s strict cultural ministry comes a debut feature of great wit and defiance. Hamed Rajabi’s Paridan az Ertefa Kam Ukhra (A MINOR LEAP DOWN)  follows the trials of an Iranian woman who, upon losing her unborn child, decides that she’s just not gonna take it anymore.

We meet Nahal in the waiting room of her gynaecologist as she receives the tragic news. In normal circumstances it should hit her like a tonne of bricks, but under the veil of her social etiquette, as well as Negar Javaherian’s deadpan performance, it’s really quite difficult to tell. Nahal sheds some tears but decides not to tell. The established forces in her life- doctors, husband, family- keep asking what’s wrong; pushing Nahal to take her meds and enjoy her life. You might expect the director to indulge in some cinematic moping from here, but it’s not tragedy that the horrid situation brews, it’s defiance.

Nahal goes on a relatively mad spree. She splashes out on her husband’s credit card; she writes off his car; and, in the film’s most audacious scene, she invites friends and family for juice… She’s like Iran’s mild mannered answer to Michael Douglas in Falling Down (it might even be a reference in the title?).

Like Paul Schrader’s ‘one man in a room’ theory, the viewer is privy to absolutely nothing the lead character doesn’t see, so we walk the entirety of the film in her modestly heeled shoes, and we quickly get inside her head. You can just feel the frustration of an indifferent, dust coated society and revel as Nahal raises two fingers towards it.

The film also seems to look at a cultural changing of the guard. Nahal is a woman stuck on the tail end of her generation and her tragedy seems to sever the connection with that past. Her younger sister represents a new age in the country. Her clothes are bright and chic; her friends are cosmopolitan; chilling in a trendy Tehran cafe. It’s a scene we seldom see in Iranian cinema. The group pokes fun at the old fashioned way Nahal carries herself, despite there only being a few years between them. At one point our hero retreats to the cafe’s kitchen to make a cup of tea. She finds a young handsome employee and enjoys a charming, flirtatious chat. He shows her a kitten he’s been hiding in a shoebox under the stove. It’s tiny, beautiful and oblivious to the world. Nahal’s eyes immediately widen.

Javaherian ends his terrific film on a choice for Nahal, between conformity and independence; the old world and the new. We’re left wondering how many other woman might be making that choice as we sit there in our seats. It’s great stuff, great cinema. The empathy machine humming away on an 88 minute cycle. Rory O’Connor