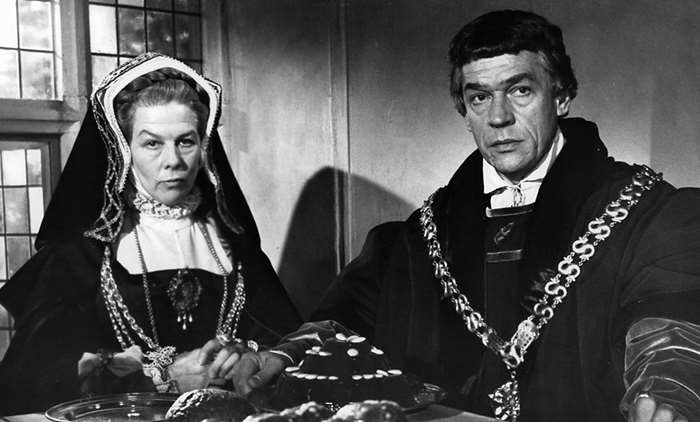 A Man for All Seasons (1966) | Eureka Cinema Bluray release

Fred Zinnemann’s Oscar-winning version of Robert Bolt’s 1960 play (set here in 1530) is fairly true to historical events that have continually captured our imagination with their rich dramatic possibilities. Here Zinnemann portrays the solicitor-general. Rich (John Hurt) as having a close and personal relationship with More, a speculative strand to the storyline, but it’s plausible, all the same. Of the starry cast, Paul Schofield, Robert Shaw and Orson Wells are the standouts, But it’s Scofield’s film and his performance is one of measured dignity with a touch of arrogance as the chancellor who wins on a moral point but ends up losing his head nevertheless.

Henry VIII is played rumbunctiously by an elegant Robert Shaw in an inspired performance that feels warm yet reverent and Orson Wells is awesome as the red-robed Cardinal Wolsey, commanding respect despite his slightly over-grown cherubic appearance, spiked by a snarling wit: “If Wolsey fell, the splash would swallow a few small boats like ours,” murmurs More. . There are some other enjoyable turns from a young John Hurt in his first major role; a striking Wendy Hiller, a glowing Susannah York, Vanessa Redgrave as Anne Boleyn (in an unpaid cameo) and Leo McKern as Cromwell.

The film opens as Henry VIII is making a furious bid to divorce Catherine of Aragon on the grounds of her inability to provide a male heir, and this leads to a clash with the Roman Catholic Church and his own lord chancellor Sir Thomas More who approval is demanded, and withheld – a move that leads to More’s eventual demise.

This film was a spectacular undertaking that was delivered – with the support of the cast taking salary cuts – at a budget of just under $2 million with locations that include Hampton Court Palace, Studley Priory, Beaulieu, Beauline Abbey and royal boat outings on the Thames. Orson Welles claimed he had Fred Zinnemann ‘removed from the set’ and directed his scenes himself and the trial and execution scenes are purportedly based on an eyewitness account, published anonymously in a Paris Newsletter of August 4, 1535. It went on to win six Oscars. Mt