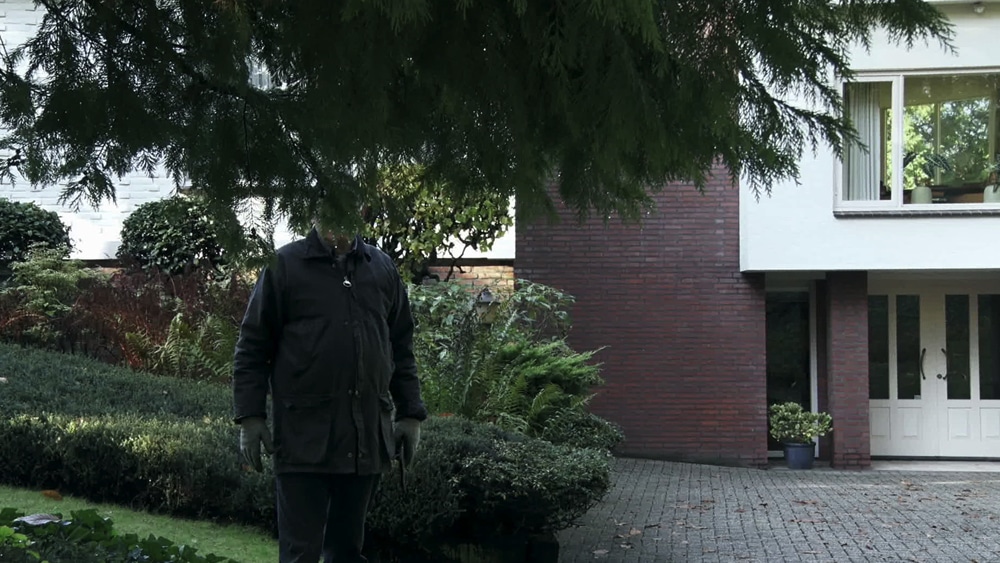 “What are you doing here? Why are you filming me?” is exactly the reaction you’d expect if you rang someone’s doorbell and randomly pointed a camera at them without any permission. But this uncontrived candid camera approach also throws up some unexpected results.

But this exactly what Dutch director Guido Hendrikx did in his observational documentary that sees him wandering around a small, unnamed town in the Netherlands, candid camera at the ready when doors are opened. The film also works as a fascinating exploration of front doors, many of them works of art.

The reactions of the homeowners in not unexpected. One person threatens quite reasonably to trash his camera, another one attempts it un successfully. Somebody wants to know “is there a deeper meaning” – apparently not. The man with the camera is told by one rather stoic man, who lets him into his house, where he carries on filming, ” he should be aware that the police may take an interest in him, you know, there are group chats, and one may get frightened”. His grandchildren are certainly not afraid.

In the town square we watch two female police officers looking at their mobiles, but no action is taken. Another couple lets him into their home and he keeps filming, whilst coffee is prepared. Gradually people let him into their homes, and their hearts as the film becomes a surprising arm’s length confessional: The wife tells him “I’ll only work for another three weeks, then it’s over. I’ve worked for the same employer 31 years. My husband was laid off two years ago, because of his age, that’s not nice, is it?” But when she goes into the kitchen, she tells her husband: “Keep an eye on him, yes”.

Soon our cameraman is becoming part of the wallpaper for several of his subjects, gaining their confidence as he inveigles himself into their lives. The soon to be pensioners are a case in point. The grandfather is also unfazed by the filming, asks the filming guest to “Leave me a note if you go, and tell me why you were here”. Left alone, the cameraman films the family leaving as Leonard Cohen’s ‘Going Home’ ends a rather enigmatic feature.

At heart we are all social animals in the right conditions. A Man and A Camera is another example of how people often accept unconfrontational intrusion in their lives, taking things a step further than their voluntarily offerings shared on social media. This uninvited guest here offers an opportunity for people to unburden themselves, a non-religious confessional, almost, once a level of trust has been established. Given the placid, unquestioning nature this unsolicited interloper, people are only to happy to let him into their lives. Hendrikx observational film makes insightful impact as an informal social study. He observes and we observe too – no questions asked, or explanations needed. AS