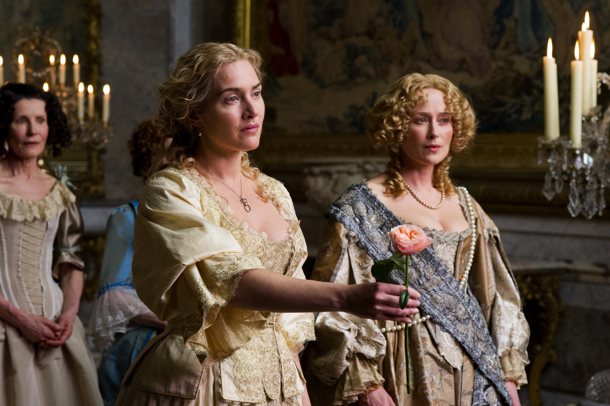 A woman’s touch sweeps through the court of Versailles in Alan Rickman’s second feature in which he also stars as a stately Louis XIV. The green fingers in question belong to Madame Sabine De Barra (Kate Winslet) who is hired by an inspirational, André Le Nôtre, to help him add a flourish of herbaceous perennials to the design and landscaping of the formal 17th century Palace.

As Sabine De Barra, Winslet is a breath of fresh air in the stultifying artifice of court life, where acolytes fester under Louis’ strict regime as absolute monarch. In a performance of confident grace and gentle determination, Winslet not only charms the birds from the trees but also the recently bereaved King himself, and they bond during an impromptu a tête à tête in the potager. Matthias Schoenaerts oozes a brooding sensuality, and even sings, as the legendary landscape architect, lashed by the tongue of his vituperative wife, a foxy Helen McCrory.

Alan Rickman shines in a sardonic and thoughtful turn as the King who eventually moves from Paris to Versailles to oversee the completion of the works  (“I felt I shouldn’t get the builders out, unless I moved in”). His sumptuously-crafted tale of intrigue and inventiveness is wittily scripted by newcomer Alison Deegan, who adds a contempo feel to the dialogue, makes this 17th century tale feel fresh and ‘de nos jours’: Molière would be proud. In a sterling cast of British acting talent Jennifer Ehle is luminous as Louis’ mistress, Madame de Montespan, Phyllida Law plays a warm and reassuring courtier, Steven Waddington adds ballast as a hard-landscaper and US actor, Stanley Tucci, adds a touch of class as a flamboyant roué.

A subplot concerning Sabine’s family life and the death of her daughter feels slightly superfluous and unconvincing but her onscreen chemistry with Schoenaerts’ Le Nôtre certainly isn’t and, in contrast to the tawdry world he inhabits with his wife at court, their budding romance blossoms naturally and freely in this glorious British production. MT