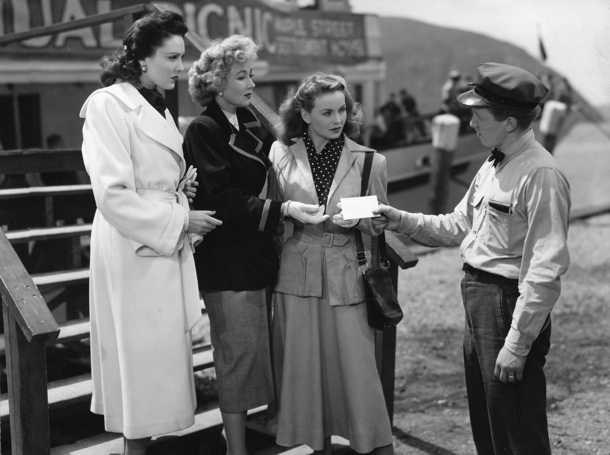 It is difficult to understand how Mankiewicz managed to direct four so different films in the span of two years: A Letter To Three Wives and All About Eve (he received Oscars for Best Director and best screenplay in both cases), are the bookends, whilst his two film-noir productions of House of Strangers (1949) and No Way Out (1950) were, in comparison, rather unrecognised, although far more more weighty in their subject-matter.

A Letter to Three Wives is based on the novel ‘Letter to Five Wives’ by John Klempner (which appeared first in ‘Cosmopolitan’); the number of wives had been whittled down by 20th Century Fox boss Darryl F. Zanuck to three. In spite of this, the film feels much longer than 103 minutes – there are simply not enough dramatic turns (unlike in All about Eve) to sustain interest.

When three middle-class wives, Deborah Bishop (Crain), Rita Phipps (Sothern) and Lora Mae Hollingsway (Darnell) enter a pleasure boat to take care of under-privileged children, they receive a message from Addie Ross (voiced by Celeste Holme), that she is going to run away with one of their husbands – leaving them all in suspense as to which husband she had picked. During the boat trip we learn in flash-back about the (rather mundane) marriage problems and get to know the husbands: Brad Bishop (Lynn), George Phipps (K. Douglas) and Porter Hollingsway (P. Douglas). Deborah, who grew up in the countryside, is ill at ease in Brad’s upper-class family, furthermore, everyone in his circle expected him to marry Addie, who is adored by all the men in the film. Rita is a writer of radio plays, and her husband George, a teacher, feels somehow ‘castrated’, since he can’t compete with his wife financially. Finally, Lora Mae grew up poor, and her husband Porter (who owns a chain of nationwide department stores) somehow suspects that she has married him only for the money.

Needless to say, there is a happy ending, and it is unanymously re-affirmed that women cannot live without a husband. Furthermore, the enigmatic and supposedly very attractive Addie is just a cypher, shown only once and from behind. In positioning her as the sexually-alluring femme fatale, who looses out in the end to three insecure, but ‘needy’ women, Mankiewicz re-affirm society’s doctrine of male dominance. There is no attempt to question the hierarchical structure of marriage, and the rather tepid acting and stage-like camera movements combine with the stale narrative in a conservative image of society – as if the war and resulting women’s liberation had not happened. AS

SCREENING AT BFI DURING THE KIRK DOUGLAS SEASON