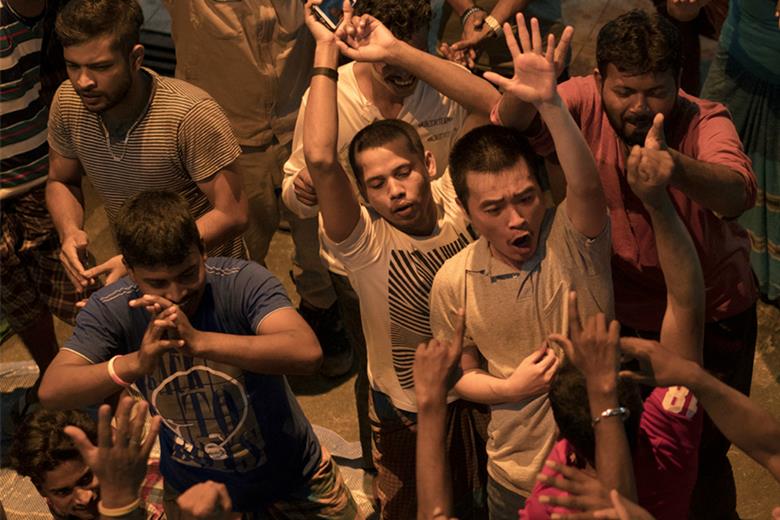 A Land Imagined could have been rather a good noirish thriller, judging from the early scenes which see a slightly sleazy Singapore detective hot on the heels of a missing migrant worker in Singapore’s crowded commercial district. What follows is a moody and sensuously cinematic arthouse drama with a subtle moral message that initially would have us believe that those who fetch up in this rich island seeking to improve their lot are somehow hard done by – or even meet a sticky end. Actor writer and director Yeo Siew Hua instead subverts expectations opting instead for a more unstructured approach that mirrors the film’s title but results in a downbeat outcome that will disappoint those hoping for twists and turns and a satisfying denouement.

Lonely reclamation construction worker Wang Bi Cheng (Liu Xiaoyi) has disappeared after forming a virtual friendship with a mysterious gamer. Detective Lok (Peter Yu) is the world weary cypher who gives nothing away in his search for the missing man, as gradually his trail loses focus as he aimlessly scours the streets and kicks a beer bottle along the sand-dunes at night. Wang is in no hurry to get away as he wanders in a febrile trance through sad cyber-cafes. His Bangladeshi co-worker and friend Ajit (Ishtiaque Zico) is one of the only decent, likeable characters here, the other human link is Mindy (Luna Kwok), a whip-smart cafe worker who offers him feisty company but is certainly no fool. Wang feels his chances rapidly melting away in the quicksand of this existential corner of Hell. The tone is ominous as the story drifts dreamily in a neon-lit goldfish bowl.

DoP Hideho Urata paints the working districts of the affluent hub of South Asia as an unsettling mirage where all is not what it seems. Lights twinkle softly in the distant nightscapes seen from the pearl white beaches of the reclamation land; but the sand has been imported from Malaysia. Mounds of aggregate and cement loom up like pyramids in the dusky night air. The breezy jazz score somehow allays our fears that this will not end well for our migrant worker, while groups of Bangladeshi workers dance themselves into a frenzy with mournful tunes from back home.

Lok’s attempts to get under the skin of his quarry in an effort to bring his search to a conclusion but in the end the drama drifts without any questions being answered, leaving us to ponder the existence of another artificial world created by a disenfranchised workforce uprooted from their homes and families and sucked into a meaningless existence of that serves no purpose other than to simply stay alive. MT