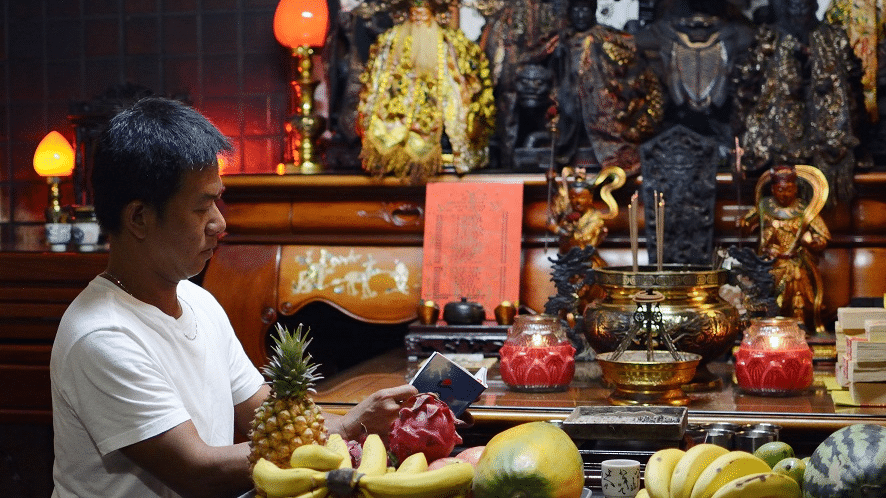 Taiwanese filmmaker Elvis A-Liang Lu shares a personal family story: having left his hometown of Minxiong at the age of eighteen to study film in the capital Taipei, a phone call from his ageing mother Elaine, sends him back to his family – and he soon remembers why he left twenty-four years ago.

Elvis’ father Lucas is addicted to gambling. He has squandered the family home, and merely shrugs his shoulders in response to Elaine’s complaints. Elvis’ brother Lucas believes he is a successful medium: we watch him advising a farmer what to plant at which time of year. But his sideline in predicting the future doesn’t pay the bills, and his pineapple business is going badly. Time to try tomatoes or should he just concentrate of the spiritualism.

Elaine has a strange relationship with Elvis: She puts up with her husband sleeping all day, but takes a dim view of her son, unaware that Elvis and his brother Lucas have had to pay off his father’s gambling debts. And even though she tells Elvis “I never visited you in Taipei because I pretended you did not belong in our family”, she expects him to be in charge of her funeral arrangements, giving orders for her ashes to be scattered in the open air, and taking ‘funeral photos’ for the grave.

With New Year approaching, Elaine then asks Elvis to give his father an extra gift of 2000 TWD. Meanwhile, Lucas has no income at all, having left his job at the distillery, and forfeited a good pension, and is soon diagnosed with a cancer that has spread from his lungs. So he must undergo chemotherapy, but is reluctant to start the procedure even though the doctor tells him it will soon be too late. On his return to Taipei, Elvis learns of his father’s death – he had spent his final days gambling.

The three DoPs create fitting images of a dysfunctional family; often handheld, they show the repressed feelings in close-up: Elaine occasionally musters the courage to complain openly, and Lucas feels betrayed by life, he never won the pot of gold despite his mediumship. Both parents are ready to die in their different ways. The director manages a happy end despite making us fully away of his own feelings. Overall, Holy Family is a long, melancholic good-bye to a difficult past. AS