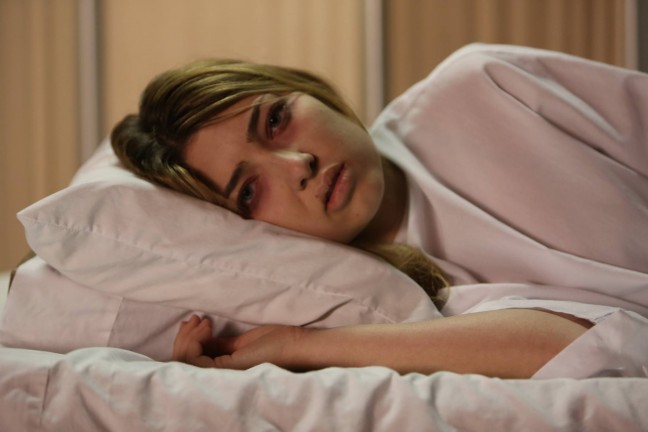 Writer/director Phil Wurtzel (Chameleon) tries the trusted formula of setting a horror film in a production of a classic play, in this case Shakespeare’s Macbeth. Unfortunately, he is not able to make anything memorable out of this pairing, let alone create something original.

Vivian Miller (Shelby) is part of a group of young offenders, spending time in a rural correction institution in the Midwest. Vivian has ben convicted of murder at the age of fifteen, and is on medication. The camp is run by Lawrence O’Neil (Elwes), a failed Broadway director with a murky past. Vivian (“I am afraid of what I don’t know”) is chosen to play Lady Macbeth. The reasons for her issues, as O’Neill points out to her, are “all the things you are holding inside”.

After this pop-psychology offering, Vivian finds an old tape of a Macbeth play, directed by O’Neill, where the female lead is killed by a stranger. A lamp falls from the stage ceiling, nearly killing Vivian and then Brian, one of the offenders, is found dead after an attack. One female member of the old stage play visits O’Neill, to warn him that the play is haunted. But he doesn’t listen and Vivian, who does not trust anybody in the institution, puts her trust in Roddy (Welch) the local outcast, to solve the mystery and save herself from the vengeful ghost.

What could have been at least an enjoyable horror flick with tongue-in-cheek vibes, is played straight with awful pathos and jump cuts, which frighten no one. B/w video clips are far too prevalent and dodgy colour clips of the old play are just second-hand. The cast tries in vain to escape the clichéd lines. Overall, A Haunting in Cawdor not only uses Shakespeare, but sells him woefully short. When O’Neill comes down heavily on one of the offenders for calling Shakespeare boring, with a vicious: “Shakespeare is talked about 300 years after his death, but nobody will think about you three minutes after your death”, he is unwittingly drawing a parallel with himself. AS

ON GENERAL RELEASE FROM 9 OCTOBER 2015