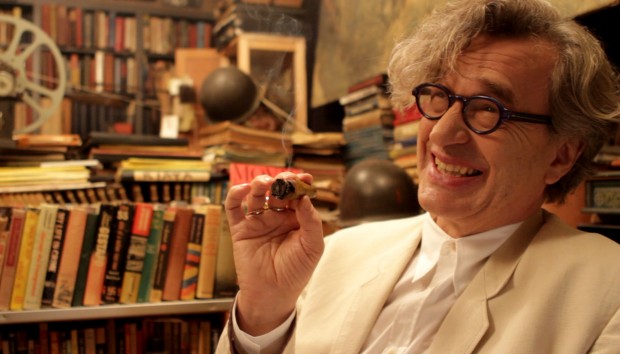 Samuel Fuller (1912-1997) was a true maverick, which is not only reflected in the 24 feature he shot, but also in his personal life that was at least as adventurous as the narratives of his films. His daughter Samantha uses excerpts from Fuller’s autobiography ‘A Third Face’, read by twelve directors and actors, as well as clips from his films, and recently discovered 16 mm films shot by her father, showing him at War, with his family and working on sets.

Growing up in the Upper West Side of New York, young Sam had to sell newspapers from an early age to support his family. A this is how journalism entered his life and became his first love – he literally bullied his way into becoming a crime reporter. His mentor, Gene Fowler, moved to Hollywood before him, where the two met up again; Fuller becoming a script writer, but soon finding out that directors did not stick to his scripts. Just before the USA entered WWII, Fuller’s novel ‘The Dark Page’ was published to great critical acclaim. Upon joining the army, he was offered a cushy desk job, but decided to join the infantry. He saw action in Africa, Sicily, Normandy on D-Day and finally during the liberation of Germany. In Aachen he met Marlene Dietrich, and persuaded her to give a message to his agent back in Hollywood (who happened to be also Dietrich’ agent), to send Fuller some cigars. Fuller was at the scene of the liberation of concentration camp in Falkenau, his 16mm films, showing the unimaginable horror. As a result, he experienced recurring nightmares when he returned to Hollywood, where he started his career as a director in 1949 with I Shot Jesse James, followed by Park Row (1952), about the newspaper business in New York. Whilst his unruly nature made him a committed anti-communist, he was equally critical of the McCarthy ‘witch hunts’ in Hollywood. When FBI director Hoover met Fuller after having seen the latter’s Pick Up on South Street, to complain about a scene in which a pick-pocket (played by Richard Widmark), makes fun of the hunt for the ‘Reds’, Fuller told Hoover to back off, telling him that “his characters say what they have to say”. Later, when the truth about Hoover’s private and professional life was uncovered, Fuller was proved right: “There was this guy, who wanted to shut me up, but used his office to cover up what he did”.But Fuller’s lack of obedience to authority made him an outsider in Hollywood. He was pushed into ‘poverty row’, directing B-pictures like Shock Corridor (1963) and Naked Kiss (1964), which were ground breaking, but marginalised the director at the time. After White Dog (1982), unjustly categorised as ‘racist’, his last two films, the David Goodis adaption Street of no Return (1989) and La Madonne et Le Dragon (1990), about the civil war in the Philippines, where produced in France.

A FULLER LIFE is a biography read in twelve segments by artists who either worked with Samuel Fuller like Jennifer Beals, Kelly Ward, Wim Wenders, Constance Towers (the latter starred in Shock Corridor and Naked Kiss), and admirers like directors Monte Hellmann and William Friedkin. The clips, showing Fuller at work on the set or at War, show a fearless person, who, while a committed American, was also a critic of his country, uncovering the activities of the ‘Ku Klux Klan’ in the press and on the screen, and being one of the first directors employing Afro-American actors in meaningful roles in his films. Whilst the readings sometimes ‘drown out’ the accompanying images, the pure wealth of the socio-political information make A FULLER LIFE a treasure trove not only for film buffs. AS