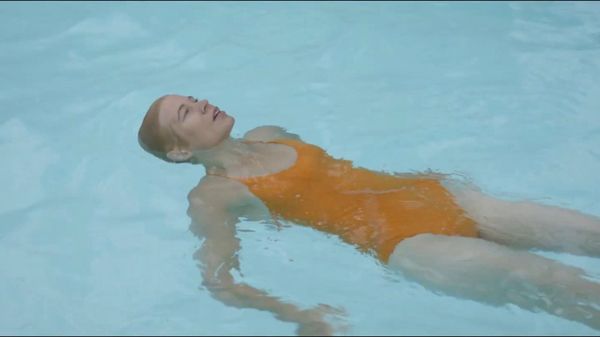 In her second film for Berlinale Bulgarian filmmaker Eliza Petkova tries her best to be enigmatic – flirting with Hitchcock’s Rebecca – but ends up with a creaky Oedipus-themed story where she shows no empathy for her characters who swim round like fish caught in an aquarium. Hitchcock would have admired her detached voyeurism – but nothing else.

The focus is femme fatale Andrea (Schwabe) just moved into a stylish house in Berlin  to live with boyfriend Philipp (Kober) and his Down’s syndrome son Martin (Trebs), whose mother has died suddenly in her sleep. Philipp is desperate to move on from the past but teenager Martin seems to resent Andrea called her the “fish swimming upside down”, for her habit of moving round on her stomach. When Philipp is away on a business trip Andrea moves into Martin’s bed. Meanwhile, housekeeper Nadeshda (Manolova) plays a suitable Mrs. Danvers, witnessing the couple’s sexual shenanigans until she written out of the script, and the house, Martin accusing her of pilfering. His deepening obsession for Andrea even sees his accusing his friend Jens (Nagy) of sleeping with Andrea when the three of them go on a trip to Sächsische Schweiz that ends in tears.

Petkova lacks experience in her direction and this shows particularly in the few action scenes which as as awkward as the title suggests. DoP Constanze Schmitt creates a summery feeling with her suffused palette of colours, as if life has seeped out of the characters and their environment. Enigma is always welcome, but Petkova over-complicates the narrative, leaving us perplexed to the very end. Petkova is clearly talented, but her inability to decide what sort of a film she wants to create becomes the stumbling block here.  The actors, particularly Schwabe, are over-extended, and have to fall back on silent-film gesturing. Overall, A Fish feels like a failure, albeit an honourable one. AS