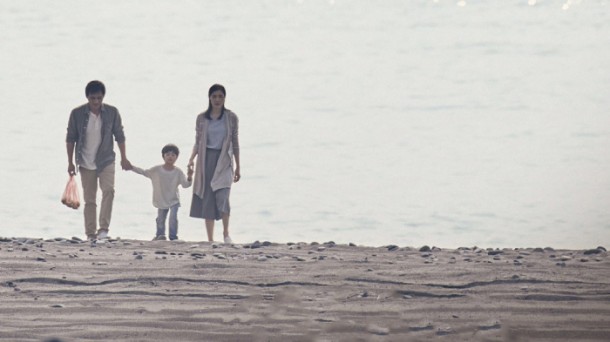 A young family on a beach in the midst of a crisis discover a beached fish. The young son Yi-An (Run-yin Bai) is morbidly fascinated but dad Haoteng (Jen Shuo Cheng) picks it up and jokingly threatens his wife Yaji (Peggy Tseng) with it. This moment of uncanny surrendering to warmth and humour is typical of Lai Kuo-An’s superbly enigmatic and engaging debut. The cheeky literalism of the scene is also deceptively simple. Nothing else that follows will be quite so straightforward. The main problem is the boy. Yi-an keeps telling everyone that he wants to go and visit his former mother and father who lived by the sea. He acts up at kindergarten and even tries to get his ailing grandfather (Akio Chen) to help him. His parents are understandably concerned but are also distracted by their own problems. They both work hard: Haoteng has a stall where he bakes and sells rolls; and Yaji works for a real estate agency that deals in the kind of high end apartments that contrast painfully with their own pokey home. As Haoteng’s father becomes increasingly debilitated after a stroke, Yaji decides she has had enough and moves out to her sister’s, taking Yi-an with her.

The domestic drama is permeated by the central mystery of Yi-an’s former life. Lai Kuo-an offers very little in the way of explanation and the little boy with his glare and pudding basin cut seems at times like Damian from The Omen. The acting by the two adult leads is brilliant. Jen Shuo Cheng is particularly good as the slightly loutish man wholly unequipped to deal with the blows life is dealing him. His birthday party attended only by his catatonic father and his possessed son is a tragi-comic masterpiece. Hsu Chih-chun’s unfussily rich cinematography grounds the magic in the confined homes and breathes a little easier on an excursion to find Yi-An’s former family. Ultimately, we are treated to a celebration of the family which – despite the difficulties involved – proves so resilient it can even move between lives. John Bleasdale.