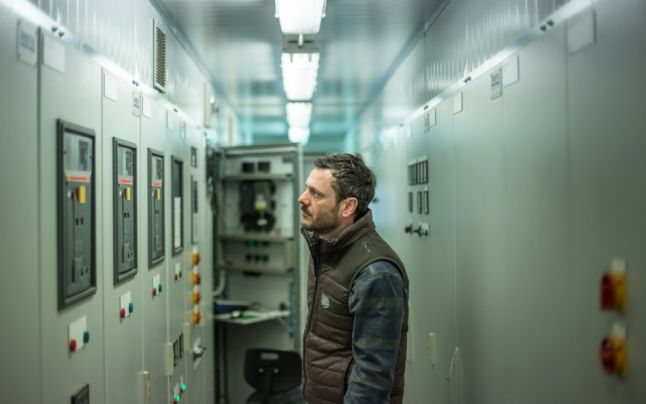 Hadrian Marcu’s debut feature sees a man very much out of his depth emotionally when it comes to women, and especially the two women in his life. Somehow this guy finds himself in an impossible situation and retreats into the background, hoping that the women take charge. Marcu cleverly shows how  professional women often end up drawing the short straw in their emotional choices.

Based on a novel by Petru Cimpuescu, this is a classic example of how men can be highly competent in the workplace but fall apart when it comes to their private lives. And the main character does just that. And this being Romania it’s unlikely to end well. Petru, an engineer, has got involved with two women: Laura (Gales) is a doctor and pregnant with his child, and Sonia (Constantin) is the wife of his colleague who dies when the car they are travelling in goes off the road, in the film’s early scenes. Feeling stressed out and guilty Petru puts Sonia first. Soon enough, nurses in the hospital inform Laura of Petru’s infidelity, and she throws him out of her flat. Clueless and adrift, Petru hides behind Sonja, hoping for the best.

This is a very confident debut by Marcu, who never lets the action get out of hand, avoiding sentimentality as well as histrionic scenes. Dumitrache is ideal for the role of the rather hesitant Petru, who cannot do right for doing wrong. Yes, he is decent, but his emotional intelligence is limited, he wants to have his cake and eat it. When confronted by Laura, he is like a little boy who wants the teacher to let him off failing his exam. The genders seem to live a very segregated life in contemporary Romania: Petru enjoys the company of co-workers, but when he is with Laura or Sonja, or even his mother, he becomes emasculated and insecure, avoiding conflict. keeping the women apart, compartmentalising their existence, living a double life, which crashes down, when Laura learns the truth. But he has still not learnt from his mistakes, and hopes that the decision will be made for him.

DoP Adrian Silisteanu uses a handheld camera for intimate effect, keeping close to the protagonists. Even their homes tell the storyline: Petru lives in a mess; whilst Laura is a proper homemaker – even though her work is as challenging as his is. Overall, it seems Marcu has re-invented the sub-genre of male malaise, but his careful detailing and string construction of the narrative arc marks him out to be a filmaker with a future. AS