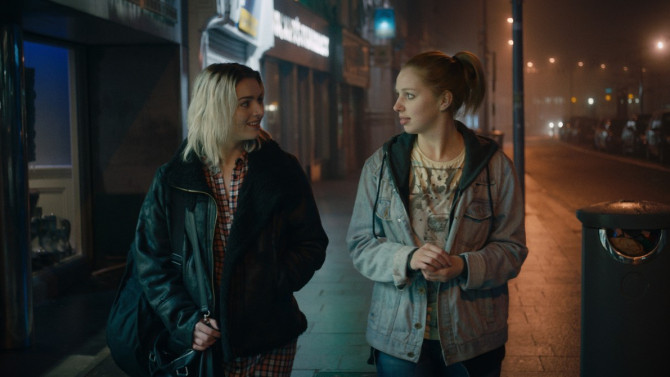 The feature made for TV debut of director/co-writer Darren Thornton, is a lively but somehow implausible story about a young girl suffering from arrested development. Conventional camerawork doesn’t help with DoP Ole Bratt Birkeland’s images looking tired along with the very clichéd casting.

Mary (Kerslake) has just left prison after a six-month stretch for disfiguring another inmate’s face. In her late teens, Mary, wearing her working class background on her sleeve, doesn’t want to grow up but she has outgrown her role of the rough Tom-Boy ‘in Perpetua’. Her best friend Charlene (Bailey), is about to get married to an older, middle-class man. In spite of many denials, Mary is jealous of Charlene and somehow dreads the wedding in which she is one of the bridesmaids, having to give a speech. More and more isolated, at odds with her self as much her environment, Mary manages to ostracise nearly everyone – except for Jess (Lee), the wedding photographer, who is also a talented singer. After a passionate night, the two very different women deal in their own way with their relationship: Jess, introvert and sensitive, questions Mary’s adoration for Charlene, telling her that she is just competing with her friend, whilst Mary, in her very abrasive way, soon manages to alienate Jess with her loutish behaviour.

Despite of being a decent stab at a Lesbian romance, the drama’s lack of authenticity lets it down: Mary is shown as being so relentlessly awful it’s impossible to imagine that anybody would like her, let alone fall in love with her and the telegraphed happy-ending not helping matters, A Date for Mad Mary is often very embarrassing, and much less funny than the filmmakers imagined. AS